Wal-Mart Stores, Inc. (WMT): This Grocer Is Expanding its Reach

The grocery business is not an easy one. With Wal-Mart Stores, Inc (NYSE:WMT) quickly becoming the largest seller of groceries in the United States, many traditional grocery chains have had trouble competing, let alone growing. But The Kroger Co. (NYSE:KR), the largest grocery store chain in the country, isn’t just sitting on its hands as Wal-Mart steals the show. The company recently acquired Harris Teeter Supermarkets Inc (NYSE:HTSI), an upscale chain located mainly in the southeast, for $2.5 billion in cash. This gives Kroger exposure to the area as well as about $4.5 billion in additional revenue.

Harris Teeter Supermarkets Inc (NYSE:HTSI) is a small chain, with just 212 stores and $4.5 billion in revenue. The company has been growing, with revenue increasing at an annualized rate of 5.8% over the past decade. Net income has hovered around $90 million for the past six years, meaning that The Kroger Co. (NYSE:KR) is paying about 28 times earnings for the company. Given the low-margin and slow-growth nature of the grocery business this seems like an extremely expensive acquisition.

But The Kroger Co. (NYSE:KR) is likely buying the company not for its profits but to expand its footprint to better compete against the likes of Wal-Mart Stores, Inc. (NYSE:WMT). Kroger has little presence in some areas of the country, and Harris Teeter Supermarkets Inc (NYSE:HTSI) fills one of those gaps in coverage.

Since Harris Teeter is more upscale than most supermarkets, this deal gives The Kroger Co. (NYSE:KR) a fighter in the battle against Whole Foods Market, Inc. (NASDAQ:WFM). Whole Foods carries much higher margins than traditional grocery stores, and the popularity of organic and artisan food is only growing with time. Kroger posted an operating margin of 2.86% in 2012 compared to 6.36% at Whole Foods. Harris Teeter Supermarkets Inc (NYSE:HTSI) has low margins but that could be due to its small size, and integration should help the company become more cost efficient.

The Kroger Co. (NYSE:KR) will use debt to finance the deal, and according to an SEC filing as of May 25 the company has $247 million in cash and $7.53 billion in debt. This deal will push the debt up to about $10 billion. Kroger already pays about $460 million in interest payments annually, and this deal will increase that number significantly.

Is Kroger a buy?

Grocery chains have low margins and slow growth, making investing in them usually unappealing. The Kroger Co. (NYSE:KR) has seen its share price surge since the middle of 2012, up 80% from its 52-week low. 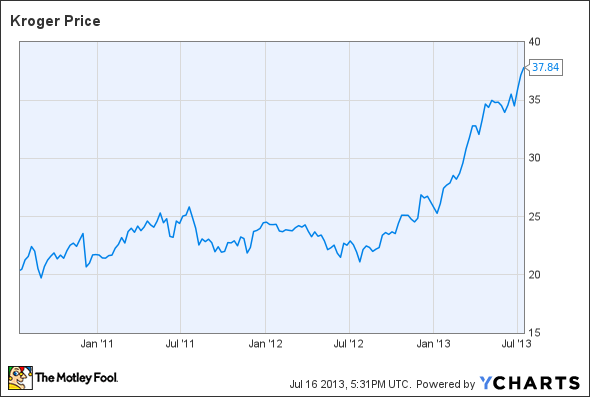