Simplicity is king when it comes to a powerful business approach. Doing too many things is often met with failure–it is the clear-minded, steady handed approach of doing one or a few things well that makes for a solid company. 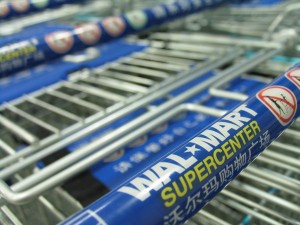 Wal-Mart Stores, Inc. (NYSE:WMT) is the first to have stepped up their online game. In the past few years, to appeal to its core consumers, the retail giant has added thousands of items and millions of square feet of display space to make stores more visually appealing to its shoppers.

In addition, it has opted to increase lines of top-selling and high quality gadgets, such as Apple Inc. (NASDAQ:AAPL)’s iPad. The company has even added a new iPad app, a marketing gimmick aimed largely at more upscale urban shoppers to draw them back into the stores.

But that is not the only strategy it is using. Last year, Wal-Mart Stores, Inc. (NYSE:WMT) spent over $300 million buying up web-related companies in order to catch up with Amazon.com, Inc. (NASDAQ:AMZN) and eBay. Increasing its online inventory by 400%, it seeks to have a wider assortment of products online. The goal moving forward is to utilize the pressure on companies they buy to reduce their costs and pass savings to consumers. With Wal-Mart Stores, Inc. (NYSE:WMT) spending over $3.55 billion in online acquisitions in 2012, expect the online segment of the retailer to grow. With less costs associated with an online marketplace I fully expect future profits and margins to rise from this activity.

Target Corporation (NYSE:TGT)’s approach focuses on one of its key advantages: price. To that end, it now boasts its aggressive price-matching policy. The retailer now matches prices that customers find at Amazon.com, Walmart.com, Bestbuy.com, Toysrus.com and Babiesrus.com, as well as matching its own online prices.

“Showrooming” – a term describing shoppers checking out items in a store but then buying cheaper online – has been an achilles heel of many big box retailers. Target Corporation (NYSE:TGT)’s policy, which expands on an existing ad-match policy, applies to items to be purchased at the register and previous purchases made within seven days. If a customer buys an item at a Target store and then finds the identical item for less elsewhere within one week, Target will match the price.

What is more, Target and WIRED, a media brand and source for the latest innovative technologies for consumers’ lifestyles, are offering WIRED Editors’ Picks for Target, a list of consumer electronics and gadgets designed to simplify and enhance digital music streaming, photography, personal fitness and more. This partnership does more than just advertise Target Corporation (NYSE:TGT) products. It also sets Target up as the ‘tech savvy’ alternative to other retailers – including tech specific stores like Best Buy and RadioShack. All of these price matching and partners translates to a company more tech savvy and poised for the growth of online retailing.

Target Corporation (NYSE:TGT) is also taking a page from Wal-Mart Stores, Inc. (NYSE:WMT) and buying up online retail outlets such as the Food Network and Rachel Ray to add to their growing online retail portfolio. This in turn translates to lower costs and higher profits moving forward.