Retail sales have been generally weak as of late, with the biggest bright spots being automobiles and home improvement retailers. While retail giants Wal-Mart Stores, Inc. (NYSE:WMT) and Target Corporation (NYSE:TGT) missed earnings in the last quarter, warehouse club Costco Wholesale Corporation (NASDAQ:COST) seems completely unaffected by the current retail malaise. Are shares of Costco the clear choice in retail, or have strong results driven the price up too high?

Difficult to compare
Costco Wholesale Corporation (NASDAQ:COST) has a starkly different business model from traditional retailers. Customers must pay an annual membership fee, currently $55, in order to shop at Costco. The company reported a comparable-store sales increase of 5% last quarter, far better than its competitors, but the profit derived from these sales is small. Operating income for the quarter was $722 million, but $531 million of this came from membership fees. Less than $200 million of operating income came from the actual sales of over $23.5 billion in products.

While the comparable-store results are impressive, they mean little in terms of profitability. Membership fees grew by 11.8% year-over-year, and at the end of the quarter there were 69.9 million members worldwide.

How big can Costco get?
Costco Wholesale Corporation (NASDAQ:COST) operates a total of 629 warehouses worldwide, so it seems there is plenty of room for future growth. There are some issues with Costco’s business model, however. In order to drive down costs, Costco severely limits the number of brands it carries. While a traditional grocery store may have dozens of different types of ketchup, for example, Costco carries just Heinz. While this eliminates decisions for the customer, it alienates those with specific preferences.

Another issue is the membership fee itself. While tens of millions of people are willing to pay Costco Wholesale Corporation (NASDAQ:COST) for the privilege of shopping, the fee acts as a barrier for many, especially poorer consumers. Combined with the fact that Costco accepts only debit cards and American Express cards, it’s clear that Costco is not going to be stealing away the bulk of Wal-Mart Stores, Inc. (NYSE:WMT)’s customers.

While Costco Wholesale Corporation (NASDAQ:COST) currently sells around $100 billion in products annually, there’s no reason why growth can’t continue for many years. For the above reasons, however, I don’t believe that Costco can match Wal-Mart Stores, Inc. (NYSE:WMT)’s scale. With all of the good news and strong results over the last few years, it seems more likely than not that shares of Costco are too expensive relative to future growth.

Any value in big retail?
When comparing companies in the same industry, the price-to-sales ratio can be useful. However, Costco complicates the picture in two ways. First, Costco Wholesale Corporation (NASDAQ:COST) is growing faster than both Wal-Mart Stores, Inc. (NYSE:WMT) and Target Corporation (NYSE:TGT), therefore deserving a higher ratio. Second, Costco has lower margins than Wal-Mart and Target, therefore deserving a lower ratio. Because of this, comparing Costco directly with its peers likely doesn’t give a meaningful result. However, looking at Costco’s historical price-to-sales ratio may provide some insight: 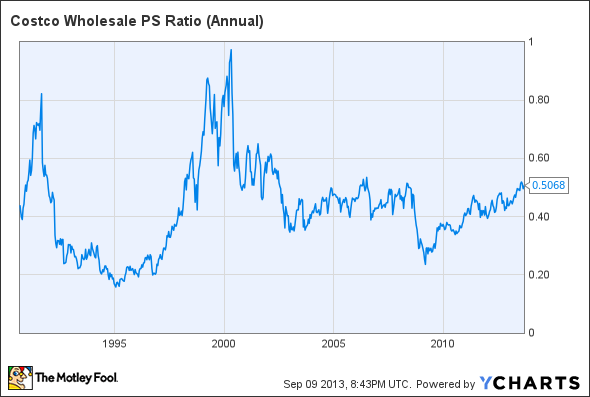 From the early 2000’s to just before the financial crisis, the P/S ratio was roughly flat, averaging around where the ratio sits today. This leads me to believe that Costco has reached a point where further growth in the stock price will be roughly proportional to revenue growth, as further expansion in the P/S ratio seems like a stretch.

Unlike Costco, Wal-Mart Stores, Inc. (NYSE:WMT) and Target Corporation (NYSE:TGT) have faced bad news and poor short-term conditions lately. Often, the best time to buy a stock is when short-term prospects are poor but long-term prospects are solid. This tends to create opportunities for long-term-oriented investors in the form of depressed prices.

After poor earnings reports from both Wal-Mart Stores, Inc. (NYSE:WMT) and Target Corporation (NYSE:TGT) in August, the stock prices for both have fallen significantly. 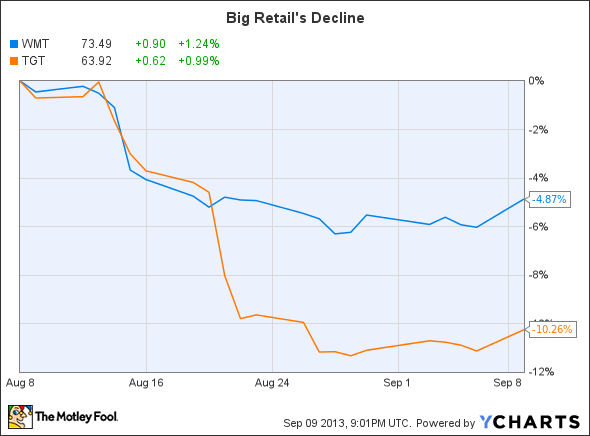 Wal-Mart Stores, Inc. (NYSE:WMT) reported a same-store sales decline of 0.3% last quarter, with net income basically flat from a year ago. The company blamed both a shaky economy and the rise in payroll taxes to normal levels for the disappointing results, lowering its sales guidance to 2%-3% from 5%-6% previously. Also, protests over the low wages Wal-Mart pays its employees are getting a lot of press, although it’s unclear whether a considerable number of actual employees are participating.