Wholesale retail clubs PriceSmart, Inc. (NASDAQ:PSMT), Costco Wholesale Corporation (NASDAQ:COST), and Sam’s Club parent Wal-Mart Stores, Inc. (NYSE:WMT) all outperformed the market over the past five years giving investors a total return of 202%, 79%, and 52% respectively (see chart below). Why did PriceSmart, Inc. (NASDAQ:PSMT) perform so well relative tothe other companies? The four reasons outlined below will tell you. 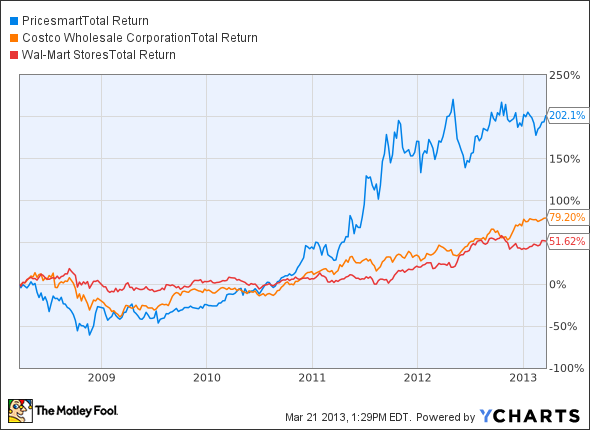 The table below illustrates a perfect example of the correlation between superior fundamentals and stock market returns. In the most recent quarter, PriceSmart won the contest on growth with revenue, operating income, and same store sales expanding 12%, 23%, and 10% respectively. On the other side of the spectrum, Sam’s Club grew revenue and same stores sales 3% and operating income declined 3.50%. Costco’s results fell in the middle.

The main driver behind PriceSmart, Inc. (NASDAQ:PSMT)’s superior fundamentals stems from operating in a region of robust growth (see table below). Business friendly policies as well as close proximity to the Panama Canal fuel growth in Latin American countries such as Nicaragua, Honduras, and Panama. The local population absolutely loves PriceSmart. On the other hand, the weaker Caribbean markets translated into lower growth in that region for PriceSmart.

PriceSmart, Inc. (NASDAQ:PSMT) operates exclusively in Latin America and the Caribbean, making it a pure emerging market play translating into some political risk.

Growth is easier to achieve for a smaller company (see table below). PriceSmart’s 30 stores represent a prime example of this mathematical fact. Costco certainly did better than Wal-Mart Stores, Inc. (NYSE:WMT) in the growth department, but not nearly as well as PriceSmart.

Compiled from SEC filings and Websites

According to the latest earnings call, PriceSmart doesn’t face much competition from American wholesale discount clubs; however, many Latin American retailers show signs of remodeling and upgrading in order to capture some of PriceSmart’s business. Costco operates as far south as Mexico and stops. Sam’s Club operates in Mexico and skips further south into Brazil.