Investors follow the Dow Jones Industrial Average (INDEXDJX:.DJI) because it fairly represents a reasonable microcosm of the U.S. economy with stocks from many different industries. So far this week, we’ve looked at health care stocks, financials, energy companies, and tech stocks. Today, let’s turn to the consumer goods sector.

Consumer-oriented stocks play a major role in the Dow because consumers are such a key element of economic activity. The ups and downs of the entire economy tend to follow the behavior of consumers, and companies that can capitalize on changing trends tend to do well. Let’s take a look at how various consumer stocks in the Dow Jones Industrial Average (INDEXDJX:.DJI) have fared so far in 2013 and what their prospects are for the rest of the year and beyond. 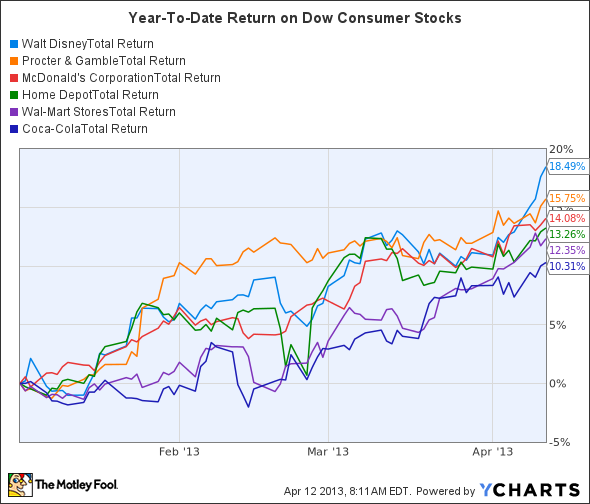 Two things stand out from this chart. All six of these stocks have performed in line with or better than the overall Dow. Moreover, many of them have done so despite having faced major challenges recently:

In February, leaked emails from Wal-Mart Stores, Inc. (NYSE:WMT) personnel warned of a “total disaster” in short-term sales to start out 2013. Concerns about the impact of higher payroll taxes and gas prices sent a near-panic throughout the retail sector, especially among those serving lower-income customers.

McDonald’s Corporation (NYSE:MCD) has been dealing with ongoing weakness. Same-store sales fell 1.9% in January and 1.5% in February, with particular weakness in the U.S. market. Moreover, concerns about avian flu in China could hurt the company’s growth in the important emerging-market country going forward as fearful would-be fast-food customers choose not to venture out.

For The Coca-Cola Company (NYSE:KO), concerns about whether the beverage giant’s products have negative health effects worthy of regulatory intervention have made investors nervous about the company’s weak domestic sales volumes, despite reasonably strong results in other parts of the world.

After dealing with high input costs, The Procter & Gamble Company (NYSE:PG) took a major hit from Venezuela’s decision to devalue its currency. The event cost the company a one-time charge of up to $275 million, as well as a drag on earnings expected to continue throughout the year.

Yet despite these warning signs, investors still see the consumer sector as a relatively safe place to invest. With easy-to-understand business models and well-known products, these companies are especially compelling to investors who have been out of the stock market for a while and want the security of a familiar name in their portfolios.

Can consumer stocks keep up the pace?
One big issue for consumer stocks is that most of them trade at fairly high earnings multiples. That reflects the investors’ desire to have defensively oriented stocks in their portfolios, but it also greatly reduces the margin of safety that those stocks usually offer. If you anticipate a downturn, you shouldn’t necessarily expect these stocks to hold up as well as they have in the past when the market sees a big correction.

The article How the Dow’s Consumer Stocks Have Fared in 2013 originally appeared on Fool.com.

Fool contributor Dan Caplinger has no position in any stocks mentioned. You can follow him on Twitter @DanCaplinger. The Motley Fool recommends Coca-Cola, McDonald’s, and Procter & Gamble. The Motley Fool owns shares of McDonald’s.