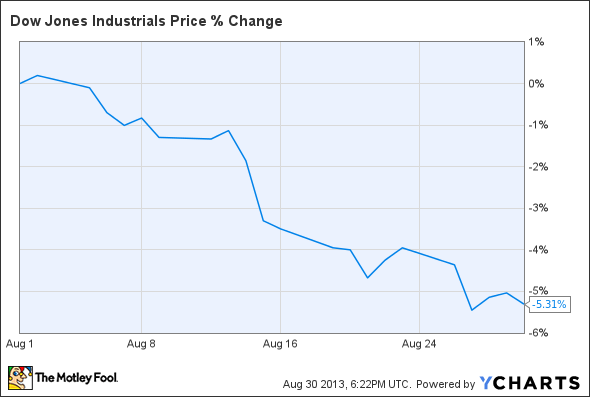 Ugly, isn’t it? That’s how the Dow Jones Industrial Average traded through August. So it should come as no surprise, as we head into a three-day holiday weekend, that investors are selling, sending the Dow 0.15% lower as of 2:45 p.m. EDT. The market was choppy following recent headlines suggesting that the U.S. could lack international support for a military intervention in Syria. Here are some of the biggest movers inside and outside of the Dow.

Wal-Mart Stores, Inc. (NYSE:WMT) is fresh off a disappointing earnings report, but it’s one of few winners in the Dow today, gaining 0.8% after the University of Michigan Consumer Sentiment Index fell to 82.1 from 85.1 in July but nonetheless beat expectations. Wal-Mart Stores, Inc. (NYSE:WMT) and competitors will face short-term headwinds if consumer sentiment and spending drops.

In other news, Wal-Mart Stores, Inc. (NYSE:WMT) announced plans to give a low-interest $50 million loan to various factories in Bangladesh in order to help them improve workplace safety after more than 1,100 workers were killed in a garment plant collapse in April and 112 workers died in a factory fire in November.

Outside the Dow, investors cheered Apache Corporation (NYSE:APA)‘s decision to sell 33% of its Egypt oil and gas business to China’s Sinopec for $3.1 billion, sending the stock price up almost 9%. The Egyptian asset produced more than 363,000 barrels of oil per day and $2.7 billion in cash flow last year. However, as violence and unrest rise in Egypt and Syria, investors worry that its production could be disrupted.

The article Dow Retreats Into the Holiday Weekend originally appeared on Fool.com and is written by Daniel Miller.

Fool contributor Daniel Miller has no position in any stocks mentioned. The Motley Fool owns shares of Apache and General Electric Company.