Discount retail chain Dollar General Corp. (NYSE:DG)‘s second-quarter results were better than expected. This sent the share price to a new high, and investors are now sitting on a pretty gain of 30% this year while the S&P 500 has gained 18% in comparison. Let’s see what’s driving Dollar General’s performance and if its market beating performance can continue into the future. 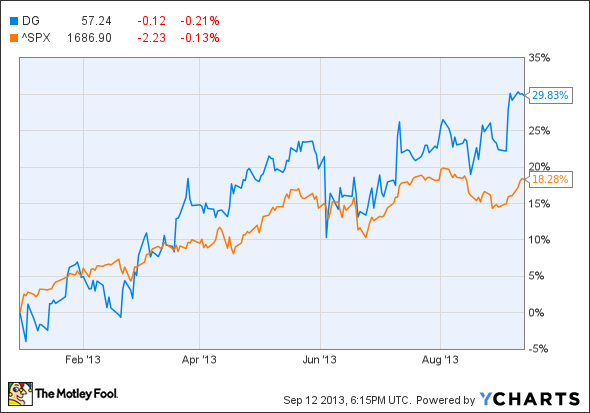 The value proposition of dollar stores is very unique–the price on a per unit basis is typically higher than at a discount store like Wal-Mart Stores, Inc. (NYSE:WMT), but the number of units sold is lower. This helps dollar stores serve consumers who are on budgets.

In fiscal 2012, Dollar General Corp. (NYSE:DG) registered record sales, operating profit, and net income. The momentum continued into the second quarter, with adjusted earnings per share witnessing a jump of 11.6% on the back of 11.3% growth in net sales. The consumables category was the main driving force behind the solid results .

Dollar General Corp. (NYSE:DG) has been witnessing a boost in sales for several months now after adding tobacco products to its lineup. In addition, the decision to offer brand-name products also proved to be beneficial. Demand has been strong for tobacco products, fresh food, candy and snacks. Higher traffic and an increase in average transaction count led to 5.1% growth in comparable-store sales .

Dollar General Corp. (NYSE:DG) opened 375 new outlets during the first half of 2013. Going ahead, the company plans to open 650 new stores, up from the 635 previously estimated. In addition, it plans to remodel or relocate about 550 stores .

If we look at Dollar Dollar General Corp. (NYSE:DG)’s performance during the last three years, we find that it has not only consistently grown revenue and net profit, but has also reduced its debt on the back of strong free cash flow generation, as shown in the chart below. For 2013, management expects same-store sales growth of 4% to 5%, and total sales are expected to rise by 10% to 11% year over year . 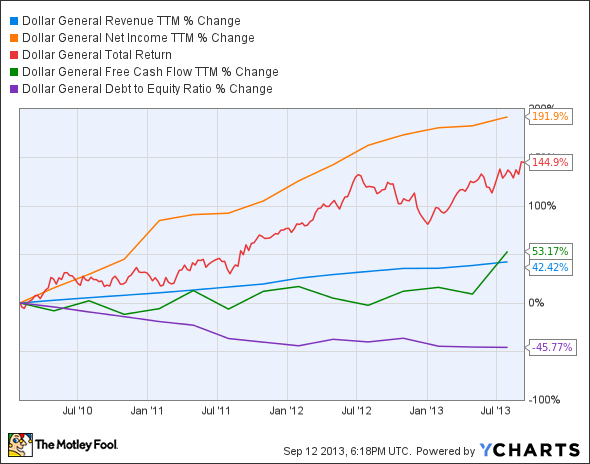 Dollar Tree, Inc. (NASDAQ:DLTR) is the smallest dollar store in the U.S. However, it has been gradually increasing its store count. Although the company’s same-store sales growth was 3.7% in the second quarter (lower than Dollar General Corp. (NYSE:DG)’s 5.1%), it managed to increase its earnings per share by 9.8% to $0.56 .

Dollar Tree, Inc. (NASDAQ:DLTR)’s $1 items, in addition to the Deal$concept, have helped it perform better. During the second quarter, Dollar Tree opened 81 stores, expanded or relocated 32 stores, and closed two stores. It currently operates 4,842 stores in 48 states and 5 Canadian Provinces as of Aug. 3, 2013, with total retail selling square footage of 41.9 million. It plans to open 340 stores by the end of this year .