The past 5 years have been very challenging for retailers. Most of them had to pay the consequences of missing the e-commerce revolution. Some of them, like giant Wal-Mart Stores, Inc. (NYSE:WMT), are trying to catch up as fast as possible, but revenue growth is still not happening. 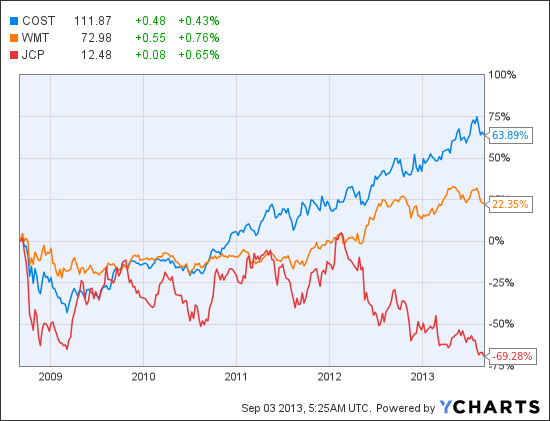 Unlike Wal-Mart Stores, Inc. (NYSE:WMT), Costco uses a membership-only system. In other words, you have to be a Costco member or a member’s guest to buy there. As of February 2013[update], Costco had 68.2 million members.

At first glance, this practice looks harmful for revenue growth, because a potential customer needs to pay at least $55 per year for membership. However, the membership-only system is a competitive advantage.

4 reasons to be a bull

Just like J.C. Penney Company, Inc. (NYSE:JCP) or Wal-Mart Stores, Inc. (NYSE:WMT), Costco’s revenue is highly exposed to macroeconomic cycles. However, by using a membership-only system, Costco is able to book nearly all of its profits one year in advance. R.J. Hottovy from Morningstar states that membership revenue actually accounts for nearly all of Costco’s operating profits.

How big is the membership effect? Assuming that each of Costco Wholesale Corporation (NASDAQ:COST)’s 68.2 million members has the cheapest membership package ($55 per year), that’s about $3.751 billion just from memberships secured 12 months in advance! Despite the increasing membership fee, the number of new members has increased substantially from 2.3 million in 2009 to 4 million in 2011.

Unlike J.C. Penney Company, Inc. (NYSE:JCP), Costco has been consistently profitable for several years. More recently, in the third quarter Costco’s operating income was up $100 million, or 16% from the same period last year.

By owning more than 80% of the properties where it operates, Costco’s return on net assets (RONA) for operations outside of North America is roughly 12%, well above the company’s cost of capital. In contrast, Wal-Mart’s RONA range for international operations over the last 10 years is 6%-7%.

Asia is a key market for Costco. The company has seen 20,000 to 60,000 membership signups on the opening day of Asian stores. That’s why the opening of 7 Asian warehouses this quarter could accelerate the company’s current growth rate.

Costco’s dividend has also grown steadily since 2004. The current yield is just 1.11%, but it is worth keeping in mind that for the past 4 years, Costco’s payout ratio did not change much. 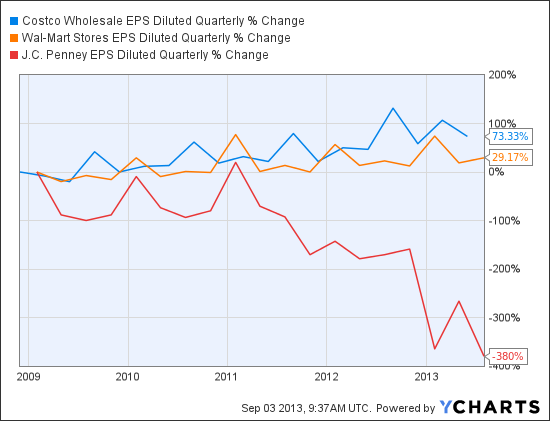