On Thursday afternoon, Amazon.com, Inc. (NASDAQ:AMZN) reported a small loss for Q2, missing analyst estimates for EPS of $0.05. Revenue grew 22% year over year to $15.7 billion, meeting analyst expectations. The strengthening of the U.S. dollar over the past year was partly to blame; holding exchange rates constant, revenue growth would have been 25%.

The outlook for Q3 was also disappointing. Management expects revenue to grow in the range of 12%-24% year over year, implying further deceleration at the midpoint. Moreover, Amazon.com, Inc. (NASDAQ:AMZN) expects to post an operating loss of $440 million to $65 million. The company has recently been offering very conservative guidance on operating income, but given the magnitude of the projected loss, it seems unlikely that Amazon will reach breakeven this quarter.

Amazon.com, Inc. (NASDAQ:AMZN)’s mixed results and weaker-than-expected guidance led Therese Poletti of MarketWatch to state that “Amazon investors may start to get fed up.” Poletti notes that Amazon trades for more than 100 times forward earnings estimates, far ahead of e-commerce rivals like eBay Inc (NASDAQ:EBAY). Yet while Amazon initially dropped after-hours following the report, the stock surged to an all-time high on Friday. 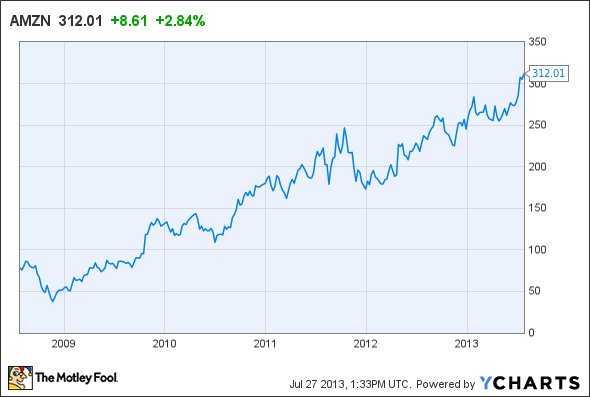 For now, Amazon.com, Inc. (NASDAQ:AMZN) seems like a “Teflon stock”: bad news slides right off. Most Wall Street analysts seemed to ignore or discount the bad aspects of Thursday’s report, instead focusing on positive operating income, increases in gross profit, or other factors that seem more bullish.

However, with Amazon.com, Inc. (NASDAQ:AMZN)’s market cap now approaching $150 billion, the company will have to produce tens of billions of dollars of annual cash flow at some point down the road to support long-term share appreciation. None of Amazon’s businesses seem likely to produce this level of profitability in the foreseeable future. Investors should instead consider locking in profits now.

Bright spots
There certainly were some bright spots in Amazon.com, Inc. (NASDAQ:AMZN)’s earnings report. While the international segment is being weighed down by currency fluctuations and economic weakness abroad, North American sales grew an impressive 30% year over year, showing some acceleration from the prior quarter.

That said, growth in the “electronics and general merchandise” category — which makes up about two-thirds of Amazon.com, Inc. (NASDAQ:AMZN)’s total sales — is clearly on a downward trajectory. North American sales in that category grew 31% last quarter, after growing 41% in Q2 2012 and 67% in Q2 2011. As this category continues to mature, its growth rate will moderate even further.

A similar trend has already played out in the media business, where Amazon.com, Inc. (NASDAQ:AMZN) got its start. Despite investing lots of money in the Kindle line of e-readers and tablets in order to drive content sales, North American media sales have grown by just 15% year to date, following 17% growth last year.

20% growth is unsustainable
Many analysts seem to expect Amazon.com, Inc. (NASDAQ:AMZN) to continue growing the top line by 20% annually for many more years. That projection implies that Amazon will be able to do something no other retailer has ever achieved, by defying the natural pattern of slowing revenue growth caused by scale. (Think of it this way: If you have $50 billion in annual sales, you can grow by 20% by adding $10 billion the next year; if you start with $200 billion in annual sales, you would need to add $40 billion in one year to hit 20% growth.)

Wal-Mart Stores, Inc. (NYSE:WMT), which today seems like a lumbering behemoth, was once in the position that Amazon.com, Inc. (NASDAQ:AMZN) occupies now. In the early 1990s, Wal-Mart regularly grew revenue by more than 20% annually, and it even achieved revenue growth of 20% in FY 2000, when sales jumped from less than $138 billion to $165 billion. However, from that point onward, Wal-Mart’s revenue growth rate has inexorably moved toward the low-mid single digit range that is normal today.