A SWOT analysis is a look at a company’s strengths, weaknesses, opportunities, and threats, and is a tremendous way to gain a detailed and thorough perspective on a company and its future. As 2013 begins, I would like to focus on a global trailblazer in the discount retail industry: Wal-Mart Stores, Inc. (NYSE:WMT). 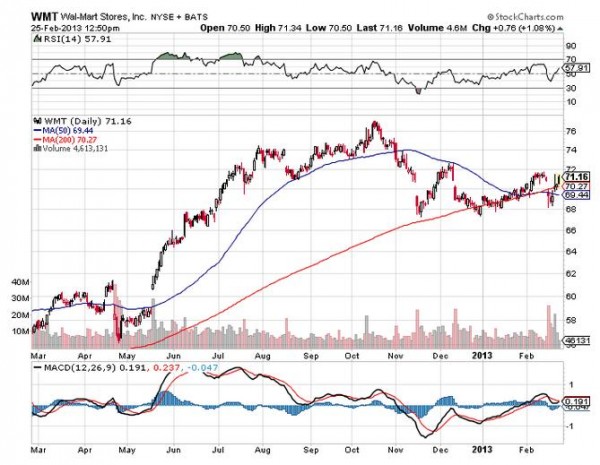 Warren Buffett once said, “Never invest in a business you can’t understand.” This not only allows the investor to purchase a company with conviction, however also allows them to spot trends blind to unfamiliar eyes. With this in mind, investors in any company should fully understand the business model of the company. Wal-Mart is a global operator of retail stores under the company’s primary brand, Wal-Mart, and their membership retail format brand, Sam’s Club. Currently, there are about 3,960 Wal-Mart stores in the United States, 6,450 Wal-Mart stores internationally, and 622 Sam’s Clubs locations. Based on market capitalization, the company is valued at $231.82 billion. Because of the extremely competitive nature of the discount retail industry, Wal-Mart possesses a profit margin of 3.19%.

1). Steady Revenue Growth: In 2007, Wal-Mart reported revenue of $344.99 billion; in 2012, the company announced revenue of $446.95 billion, representing year over year annual growth of 5.32%, a strong trend that is highly anticipated to continue into the future, with projections placing 2017 revenue at $587.10 billion.  This growth has been a direct result of substantial growth in store count and further adoption of their low price platform because of rough economic conditions.

2). Dividend: Currently, Wal-Mart pays out quarterly dividends of $0.40, which when annualized puts the dividend as yielding 2.29%

3). Basement Valuation: Presently, the company carries a price to earnings ratio of 14.26, a price to book ratio of 3.32, and a price to sales ratio of 0.52, all of which indicate a company trading with a basement valuation

4). Relatively Low Volatility: At the moment, Wal-Mart possesses a beta ratio of 0.36, representing a company trading with considerably less volatility than the overall market, a major advantage for long-term investors

5). Positive Free Cash Flow Position: In 2013, the company is projected to generate $14 billion in free cash flow, allowing the company to reward shareholders or reinvest in their own business

7). Recession Proof Business: The great majority of Wal-Mart’s core business is concentrated in the sale of necessity products, such as toilet paper and toothpaste, and with this characteristic comes a near recession proof business, one that has not suffered as greatly as others in times of economic downfall

1). Lack of Movement Over the Past Decade: Over the past decade, the company’s stock has only increased 41%, not taking into account dividends, which have underperformed the broader market by nearly 40 percentage points, despite record revenues and earnings–a weakness as fundamentals have not been driving the stock’s performance

2). Net Debt: Despite possessing $8.6 billion of cash and cash equivalents on their balance sheets, the company’s debt load of $77 billion results in a rather substantial net debt, a major weakness for investors

1). Dividend Growth: Since implementing their dividend program in 1973, Wal-Mart has consistently raised their dividend payouts, a trend that is widely anticipated to continue into the future 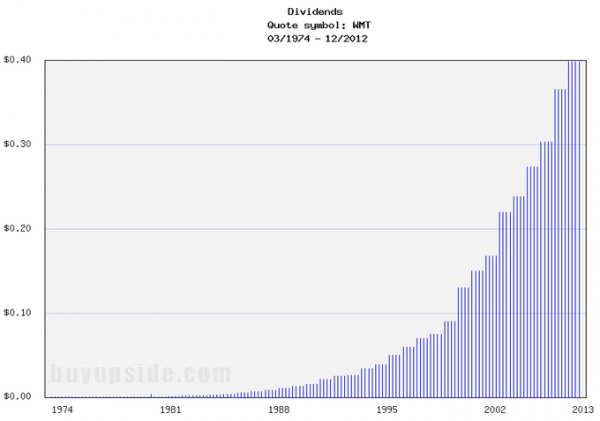 2). Store Count Growth: The number of the United States Wal-Mart stores has increased from 3,660 in 2008 to 3,960 currently, with international store count growing from 3,600 in 2008 to 6,450 currently, and further growth in store count is anticipated in both of these segments, providing opportunity for the company

What Should Apple Inc. (AAPL) Do With All That Cash?

Amazon.com, Inc. (AMZN)’s Domination: Why You Should Hold This Company...

What Do Wal-Mart Stores, Inc. (WMT)’s Results Say for Retail?