Waddell & Reed Financial, Inc. (NYSE:WDR) shares haven’t seen a lot of action during the third quarter. Overall, hedge fund sentiment was unchanged. The stock was in 17 hedge funds’ portfolios at the end of the third quarter of 2018. At the end of this article we will also compare WDR to other stocks including Wageworks Inc (NYSE:WAGE), AAR Corp. (NYSE:AIR), and Acacia Communications, Inc. (NASDAQ:ACIA) to get a better sense of its popularity.

At Q3’s end, a total of 17 of the hedge funds tracked by Insider Monkey were long this stock, a change of 0% from the previous quarter. By comparison, 14 hedge funds held shares or bullish call options in WDR heading into this year. With the smart money’s positions undergoing their usual ebb and flow, there exists an “upper tier” of key hedge fund managers who were upping their stakes meaningfully (or already accumulated large positions). 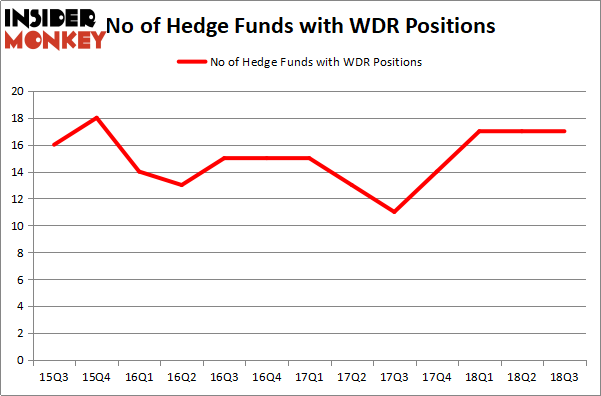 Judging by the fact that Waddell & Reed Financial, Inc. (NYSE:WDR) has faced declining sentiment from hedge fund managers, it’s easy to see that there lies a certain “tier” of hedge funds that decided to sell off their full holdings last quarter. At the top of the heap, Gregg Moskowitz’s Interval Partners sold off the biggest investment of all the hedgies tracked by Insider Monkey, valued at close to $1.2 million in stock, and Paul Tudor Jones’s Tudor Investment Corp was right behind this move, as the fund dumped about $0.3 million worth. These transactions are intriguing to say the least, as aggregate hedge fund interest stayed the same (this is a bearish signal in our experience).

As you can see these stocks had an average of 14.75 hedge funds with bullish positions and the average amount invested in these stocks was $63 million. That figure was $146 million in WDR’s case. AAR Corp. (NYSE:AIR) is the most popular stock in this table. On the other hand NBT Bancorp Inc. (NASDAQ:NBTB) is the least popular one with only 8 bullish hedge fund positions. Waddell & Reed Financial, Inc. (NYSE:WDR) is not the most popular stock in this group but hedge fund interest is still above average. This is a slightly positive signal but we’d rather spend our time researching stocks that hedge funds are piling on. In this regard AIR might be a better candidate to consider a long position.