The manufacturing sector has been one of the biggest drivers of the economic recovery after the recession. The upswing in manufacturing activity has also helped ancillary sectors like maintenance, repair and operation (MRO). W.W. Grainger, Inc. (NYSE:GWW) is a leading broad-line supplier of MRO products, with consistently improving operations, a great reputation, and room for continued growth.

Based on data of private companies through 2012, the machinery, equipment and supplies sector increased a solid 17% and it is among the U.S. economy’s top 10 growth segments. W.W. Grainger, Inc. (NYSE:GWW), along with peers like Applied Industrial Technologies (NYSE:AIT) and WESCO International, Inc. (NYSE:WCC), is one of the few heavyweights in this segment.

W.W. Grainger, Inc. (NYSE:GWW) boasts a sound balance sheet, low debt, and healthy cash flow, which all allow it to invest in growth opportunities, raise dividends, and return capital though share buybacks. Despite missing consensus estimates on revenue in its last reported quarter, it has consistently hiked dividends for more than four decades. 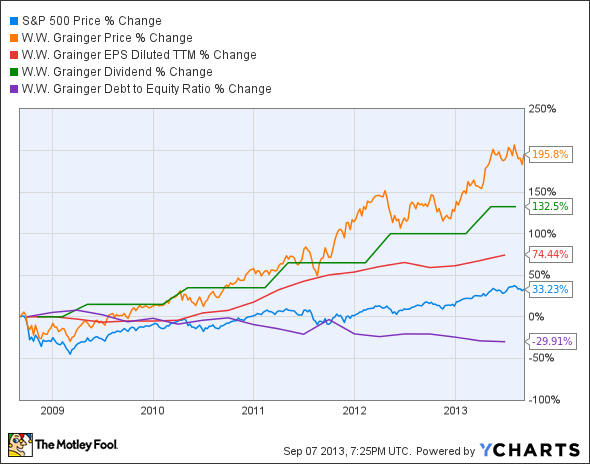 W.W. Grainger, Inc. (NYSE:GWW) is a leading name in the MRO space, and stands to gain from this growth as it has presence across the globe. Latin America and Asia are among the world’s fastest-growing regions. Consequently, the company is planning to spend $150 million to expand its sales force and add more products to its portfolio in these regions.

Grainger is also looking at merger & acquisitions to grow. It recently acquired E&R Industrial Sales. This acquisition brings in an industry-leading team of metalworking experts and strengthens W.W. Grainger, Inc. (NYSE:GWW)’s capability of serving customers in the manufacturing space. E&R Industrial provides more than 100,000 products to 4,000 customers across the aerospace, automotive and general industrial sectors with annual revenue of $180 million in 2012. This acquisition is expected to be accretive from 2014 onwards.

The business to business (B2B) e-commerce industry in the U.S. is projected to be twice the size of the business to customer (B2C) segment. By the end of 2013, its value could reach an estimated $559 billion.

Grainger has plans for continued investments in its e-commerce platform, one of its most profitable sales channels. New product additions and private label offerings are expected to increase revenue and margins.

Through these efforts, W.W. Grainger, Inc. (NYSE:GWW) aims to improve on its second-quarter revenue of $2.4 billion, up 6% year over year, and its earnings of $3.03 per share, up 15%. Of the 6% revenue growth, 4 percentage points were attributed to volume growth, 2 percentage points were due to pricing revisions, and 1 percentage point came from acquisitions, partially offset by a negative-1-percentage-point impact from unfavorable currency movements.

WESCO International, Inc. (NYSE:WCC) released its quarterly report at the end of July and earnings missed consensus estimates. It recorded quarterly EPS of $1.25, below the consensus estimate of $1.35, and revenue of $1.89 billion, up 13.2% year over year, primarily on account of acquisitions. For example, the acquisition of EECOL Electric last December boosted sales in the June quarter.

The reduction in organic sales and unfavorable currency movements partly offset the benefits that accrued from the acquisitions. WESCO International, Inc. (NYSE:WCC)’s client base is quite diversified, with no customer accounting for more than 3% of its total sales in 2012, which is a good sign since the company doesn’t have to depend on a few sources for most of its revenue.