Vonage Holdings Corp. (VG): Why Big Telecoms Are Very Worried About This Stock

There is a small company on its way to becoming a strong competitor in the telecom service, specially in emerging markets: Vonage Holdings Corp. (NYSE:VG), a voice over IP (VoIP) network and Session Initiation Protocol (SIP) company with a $600 million market capitalization.

Put simply, the company is in a similar business to Skype–with its unlimited international calling to the U.S. and over 60 countries plans, the company’s product is an excellent competitor in the making. This, the fact that stock price is up 42% in the past 12 months, and a buy call from Kevin Robinson at Sumzero last week, made me become interested in the stock. To my surprise, I found several reasons to believe that there is more room for stock price increases, and even after the amazing rally that made Vonage Holdings Corp. (NYSE:VG) almost double its market cap size in 12 months this stock may still be too cheap. 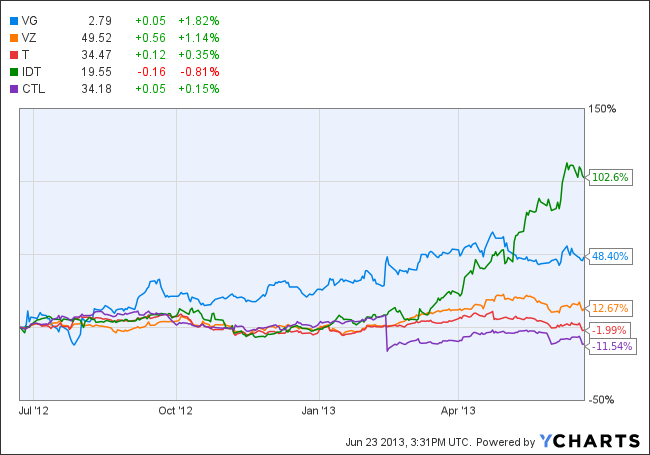 Real revenue growth is about to start

Looking at the revenue graphs, we find that the company’s revenue declined from the prior year. According to the company slides, this is due to the impact of lower Universal Service Fund (“USF”) fees and the expansion of lower priced offerings to meet customer needs. But although revenue decreased, the last EBITDA came out at $34 million, up $2 million from the prior year. Profitability increased by a small margin, although revenue is not growing.

The fact that profitability increased while revenue decreased is a signal that the business seems to be financially stable. Furthermore, the short term absence of growth has caused most analysts and investors to overlook Vonage’s real growth potential. As Kevin Robinson wisely points out, Vonage Holdings Corp. (NYSE:VG) has been preparing some amazing future growth by investing strategically in its marketing and distribution channels. The slides of the earnings call presentation pointed out that the last EBITDA includes investments of $6 million in “growth priorities:” international expansion, mobile and BasicTalk. This explains why EBITDA grew despite the decrease in revenue.

This investment could pay off well: 375 part-time sales agents will start approaching community teams, selling directly to ethnic groups. There is also $30 – $35 million planned for investing in implementation of software solutions and network equipment. These factors suggest that the current 2014 consensus EBITDA of $133 million will be beaten by a surprisingly decent margin.

There is valuable intellectual property here: about 59 patents, including the U.S. Pat. No. . 8,213,594, (“Method and Apparatus for Placing a Long Distance Call Based on a Virtual Phone Number”), which relates to a virtual number that allows somebody to call from a number that appears to be in the same country, thereby enjoying local rates. This and other patents could help Vonage Holdings Corp. (NYSE:VG) to get some royalties in the future.

Vonage Holdings Corp. (NYSE:VG) has a first-to-market approach and a focus on “under-served population segments,” where demand for domestic and international calls remains very strong.

Everybody loves stock repurchases because they help to increase earnings per share artificially  Well, Vonage has already authorized a program to repurchase up to $100 million of its common stock by the end of 2014 (as much as 16% of the current market capitalization), which is a much more aggressive plan than the original $50 million plan. Since the beginning of the program last August, Vonage Holdings Corp. (NYSE:VG) has purchased 14 million shares.

According to Robinson, Vonage is definitely a value stock. According to a DCF model, Vonage is worth $3.49 per share, excluding NOLs of ~$0.73. Furthermore, Robinson’s EBITDA estimates suggest an upside limit of $4.76 per share and a downside of $2 per share, using the lowest EBITDA figure and EV/EBITDA multiple over the past 5 years. Using an LBO valuation, Robison thinks that the odds are high that Vonage becomes private at $3.51 per share.