Vistra Energy Corp. (NYSE:VST) was in 38 hedge funds’ portfolios at the end of the third quarter of 2018. VST has seen a decrease in support from the world’s most elite money managers in recent months. There were 43 hedge funds in our database with VST holdings at the end of the previous quarter. Our calculations also showed that VST isn’t among the 30 most popular stocks among hedge funds.

At the end of the third quarter, a total of 38 of the hedge funds tracked by Insider Monkey held long positions in this stock, a change of -12% from the previous quarter. Below, you can check out the change in hedge fund sentiment towards VST over the last 13 quarters. With hedge funds’ positions undergoing their usual ebb and flow, there exists a few notable hedge fund managers who were boosting their stakes substantially (or already accumulated large positions). 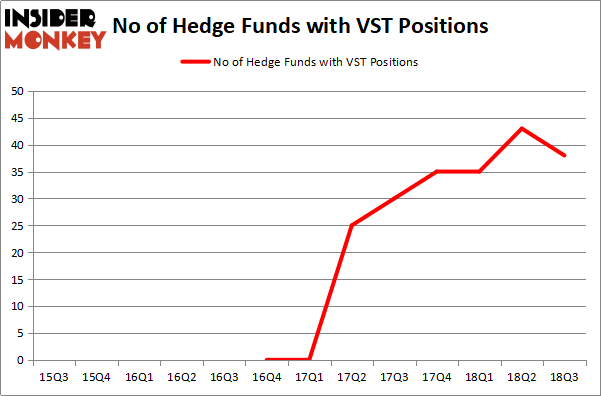 When looking at the institutional investors followed by Insider Monkey, Oaktree Capital Management, managed by Howard Marks, holds the biggest position in Vistra Energy Corp. (NYSE:VST). Oaktree Capital Management has a $888.6 million position in the stock, comprising 12% of its 13F portfolio. The second largest stake is held by Scopia Capital, managed by Matt Sirovich and Jeremy Mindich, which holds a $300.3 million position; 5.8% of its 13F portfolio is allocated to the company. Other members of the smart money that are bullish comprise Jonathan Barrett and Paul Segal’s Luminus Management, Mark T. Gallogly’s Centerbridge Partners and James Dondero’s Highland Capital Management.

Seeing as Vistra Energy Corp. (NYSE:VST) has witnessed falling interest from hedge fund managers, logic holds that there lies a certain “tier” of hedge funds that elected to cut their entire stakes last quarter. It’s worth mentioning that John Paulson’s Paulson & Co said goodbye to the biggest position of all the hedgies watched by Insider Monkey, totaling about $87.5 million in stock, and Jos Shaver’s Electron Capital Partners was right behind this move, as the fund dumped about $28.5 million worth. These bearish behaviors are interesting, as aggregate hedge fund interest dropped by 5 funds last quarter.

As you can see these stocks had an average of 16.5 hedge funds with bullish positions and the average amount invested in these stocks was $3.68 billion. That figure was $3.61 million in VST’s case. Cadence Design Systems Inc (NASDAQ:CDNS) is the most popular stock in this table. On the other hand Icahn Enterprises LP (NASDAQ:IEP) is the least popular one with only 4 bullish hedge fund positions. Compared to these stocks Vistra Energy Corp. (NYSE:VST) is more popular among hedge funds. Considering that hedge funds are fond of this stock in relation to its market cap peers, it may be a good idea to analyze it in detail and potentially include it in your portfolio.