But does this really mean anything? As my fellow Fool Morgan Housel recently pointed out, Visa’s credit cards in circulation are essentially unchanged from 2009 (although debit cards continue to grow in number). Credit card debt per capita in the United States is also lower than it’s been since 1996. This should be very bad news for Visa and fellow payments processors Mastercard Inc (NYSE:MA), American Express Company (NYSE:AXP), and Discover Financial Services (NYSE:DFS), which all draw from the same pool of consumers, and which tend to benefit from the expansion of credit debt outstanding.

What matters, though isn’t just volume, but the quality of that volume. My Foolish collaborator Sean Williams notes that both Visa Inc (NYSE:V) and Mastercard Inc (NYSE:MA) avoid the negative consequences of delinquent or doubtful accounts because neither serves as a direct lender, acting instead as solely a payment processor. To see how important this is to the financial health of the card issuer, just look at the relative stock performance of each of the four companies through the worst part of the financial crisis: 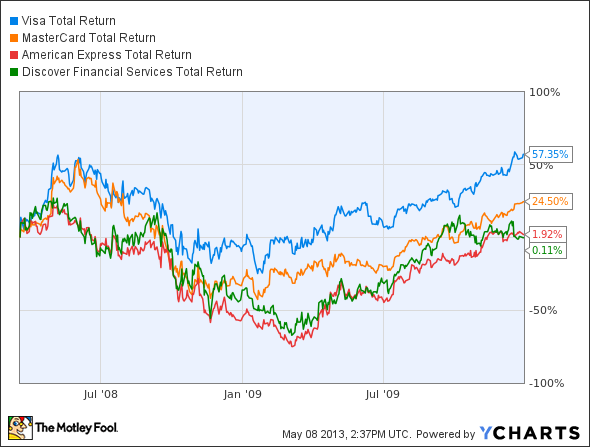 This is pretty much what you’d expect. Visa Inc (NYSE:V) and Mastercard Inc (NYSE:MA) avoid the worst of the financial consequences, gaining share values roughly approximating their respective global market positions. The post-crisis period produced a more modest rebound  in Visa’s fortunes than that experienced by most of its peers, but it was a better preserver of capital through a shaky market period to begin with.