With a tentative release date of June 27, 2014, Viacom, Inc. (NASDAQ:VIA)‘s Paramount pictures will release the fourth Transformers movie to a great deal of fanfare. This will most likely serve as a boon to the sales of Hasbro, Inc. (NASDAQ:HAS)‘s Transformers toy line and boost overall revenue for both companies. However, you may wonder what life will entail for Hasbro beyond the release of this next movie. This is a valid concern. Let’s examine the prospects of this company beyond the next movie.

The Transformers movies were released in 2007, 2009, and 2011. As you can see in the chart below, Hasbro, Inc. (NASDAQ:HAS) experienced vast improvements in revenue following each of those releases. Action-loving Gen Xers who remember playing with Generation 1 Transformers back in the ’80s bring themselves and their children to see these movies. Historical bias could lead you to conclude that the next movie may do the same; however, these people may eventually tire of seeing the same reinvented storylines over and over. 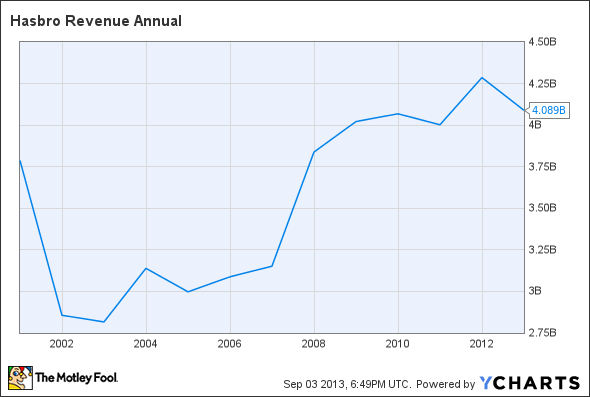 HAS Revenue Annual data by YCharts.

Brand fatigue also represents a legitimate concern, especially since Hasbro, Inc. (NASDAQ:HAS) has decided to focus on its most popular core products such as G.I. Joe, Monopoly, and My Little Pony, as well as Transformers. While Hasbro does a good job of reinventing these products, a competitor with a fresh new product could steal consumer attention.

With Transformers 4, Hasbro, Inc. (NASDAQ:HAS) intends to combat this potential problem by bringing on a whole new human cast and moving the premise in a different direction. According to IMDb, the movie will actually center on a discovery made by a mechanic and his daughter that pits them against Autobots, Decepticons, and the government. If this storyline holds true, humans versus Transformers would represent a break with the past.

Viacom, Inc. (NASDAQ:VIA) is no stranger to brand fatigue. In 2003, Star Trek: Nemesis bombed, bringing in a mere $67 million. This essentially marked the end of a successful 16-year run for the Star Trek franchise, until J.J. Abrams revived it in 2009. The two movies produced under the J.J. Abrams banner, Star Trek and Star Trek Into Darkness, grossed more than $385 million and $462 million, respectively, at the box office.

License for the future

Hasbro recently expanded its merchandising relationship with entertainment conglomerate The Walt Disney Company (NYSE:DIS), under which Hasbro will produce toys and games based on Disney’s popular Marvel and Lucasfilm content. Marvel’s Iron Man 3 and TheAvengers grossed $1.2 billion and $1.5 billion, respectively, serving as a catalyst for the 8% year-to-date increase in The Walt Disney Company (NYSE:DIS)’s consumer product revenue. It’s anticipated that the new Star Wars will do at least as well as the Marvel-based films. Hasbro wants a piece of the success by making toys based on these popular brands.