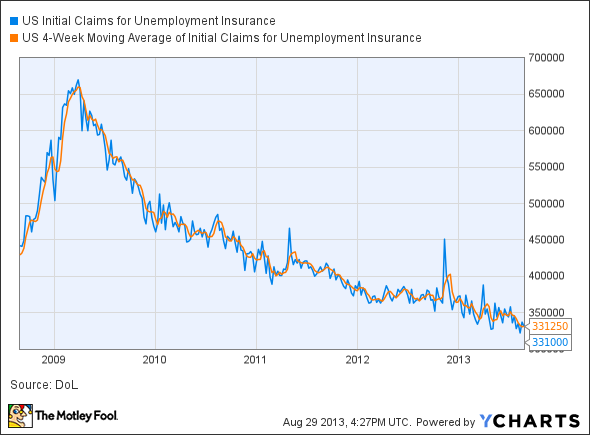 The key report here, though, is the GDP revision. The advance estimate of GDP was 1.7% growth for the second quarter. Earlier this month, the trade deficit for June was reported, coming in far below expectations — a positive for the economy. Analysts began revising their GDP estimates upward, and the consensus forecast rose to 2.3% growth. Today the Department of Commerce reported a revised figure of 2.5% growth. The better-than-expected GDP report gives credence to Federal Reserve Chairman Ben Bernanke’s view that the U.S. economy is doing better and raises the likelihood that the Fed will begin winding down its long-term asset purchases this year. U.S. Treasury notes sold off slightly on the news.

Verizon Communications Inc. (NYSE:VZ) has been trying to buy out Vodafone’s stake for a few years now, but the sticking points have always been the price and Vodafone’s reluctance to pay a likely $10 billion tax on the sale. According to the article in the Journal, Verizon is hoping to take advantage of low interest rates before they go any higher. Shareholders should carefully analyze any deal that goes through, as Verizon will likely have a much greater debt load than it does already.

The article Verizon’s Potential Deal Leads the Dow Higher originally appeared on Fool.com and is written by Dan Dzombak.