The government requires hedge funds and wealthy investors with over a certain portfolio size to file a report that shows their positions at the end of every quarter. Even though it isn’t the intention, these filings level the playing field for ordinary investors. The latest round of 13F filings disclosed the funds’ positions on September 30. We at Insider Monkey have made an extensive database of more than 700 of those elite funds and prominent investors’ filings. In this article, we analyze how these elite funds and prominent investors traded Varian Medical Systems, Inc. (NYSE:VAR) based on those filings.

Is Varian Medical Systems, Inc. (NYSE:VAR) an exceptional investment today? Hedge funds are getting less optimistic. The number of bullish hedge fund bets decreased by 5 in recent months. Our calculations also showed that var isn’t among the 30 most popular stocks among hedge funds. VAR was in 19 hedge funds’ portfolios at the end of September. There were 24 hedge funds in our database with VAR positions at the end of the previous quarter. 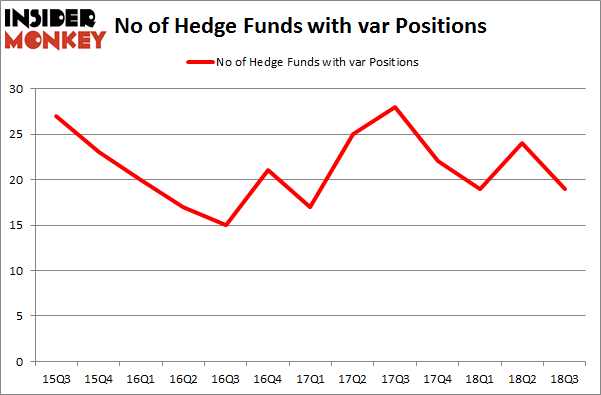 According to Insider Monkey’s hedge fund database, Renaissance Technologies, managed by Jim Simons, holds the number one position in Varian Medical Systems, Inc. (NYSE:VAR). Renaissance Technologies has a $136.1 million position in the stock, comprising 0.1% of its 13F portfolio. The second largest stake is held by Arrowstreet Capital, led by Peter Rathjens, Bruce Clarke and John Campbell, holding a $94.1 million position; the fund has 0.2% of its 13F portfolio invested in the stock. Some other members of the smart money that hold long positions contain Cliff Asness’s AQR Capital Management, John Overdeck and David Siegel’s Two Sigma Advisors and Noam Gottesman’s GLG Partners.

Seeing as Varian Medical Systems, Inc. (NYSE:VAR) has experienced declining sentiment from hedge fund managers, logic holds that there lies a certain “tier” of money managers who were dropping their full holdings last quarter. It’s worth mentioning that Brian Ashford-Russell and Tim Woolley’s Polar Capital sold off the largest position of the 700 funds monitored by Insider Monkey, totaling an estimated $3.6 million in stock. George Hall’s fund, Clinton Group, also sold off its stock, about $2.5 million worth. These transactions are intriguing to say the least, as aggregate hedge fund interest was cut by 5 funds last quarter.

As you can see these stocks had an average of 31.25 hedge funds with bullish positions and the average amount invested in these stocks was $1.66 billion. That figure was $576 million in VAR’s case. Michael Kors Holdings Ltd (NYSE:KORS) is the most popular stock in this table. On the other hand Open Text Corporation (NASDAQ:OTEX) is the least popular one with only 19 bullish hedge fund positions. Compared to these stocks Varian Medical Systems, Inc. (NYSE:VAR) is even less popular than OTEX. Considering that hedge funds aren’t fond of this stock in relation to other companies analyzed in this article, it may be a good idea to analyze it in detail and understand why the smart money isn’t behind this stock. This isn’t necessarily bad news. Although it is possible that hedge funds may think the stock is overpriced and view the stock as a short candidate, they may not be very familiar with the bullish thesis. In either case more research is warranted.