On Monday May 12, ValueAct Capital, managed by Jeffrey Ubben, declared the purchase of more than 2.95 million shares of Microsoft Corporation (NASDAQ:MSFT), which already is the fund’s most valuable equity holding. The transaction was reported at the U.S. Securities and Exchange Commission via a Form 4 filing presented by Mason G Morfit, President of ValueAct Capital and a Board Director at Microsoft -which obliges him to declare any stock purchases as an insider. The acquisitions took place on May 8th and May 9th, through several transactions, for prices ranging from $39.49 per share to $39.59 per share. Following, ValueAct owns more than 74 million shares of the company.

Microsoft is a $330 billion market cap tech company that needs no introduction whatsoever. Fundamentally, the company looks quite decent: it boasts margins and returns slightly above its industry’s average, holds relatively low debt levels, and its stock trades at only 14.9 times the company’s earnings (see Key Stats below). 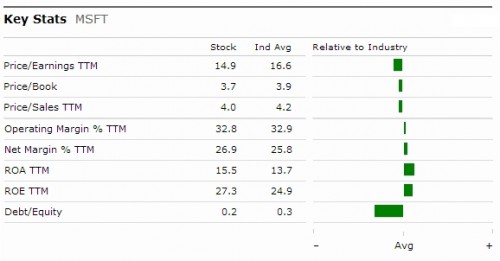 In addition to ValueAct, several analysts and major hedge funds also seem to feel bullish about this stock. Donald Yacktman’s Yacktman Asset Management recently declared holding more than 32.9 million shares of the company by the end of Q1 2014, and Jean-Marie Eveillard’s First Eagle Investment Management last reported owning 32.18 million shares of the company –up 3% in relation to the previous quarter.  Another important Microsoft bull is Wells Fargo & Co (NYSE:WFC), which increased its stakes by 1% over Q1, and now owns roughly 37.6 million shares.

ValueAct is a long-term focused fund that usually holds a small number of positions (currently, 12), which are usually held for several years. This strategy provides the fund with higher returns. Despite the limited number of stocks that ValueAct owns, the market value of its portfolio surpasses $12 billion. Trailing Microsoft, the fund’s largest stakes are placed in Valeant Pharmaceuticals Intl Inc (NYSE:VRX) and Motorola Solutions Inc (NYSE:MSI). These three holdings account for approximately 55% of the total value of its equity portfolio.