Valuation of the Week 1: A Tesla Motors Inc (TSLA) Test

I taught the first session of my valuation class, that I previewed in my last post, today. As part of that class, I do what I call a “valuation of the week”, where I pick a company and value it and then post both my valuation (with the spreadsheet and the raw data that I used) and a shared Google Inc (NASDAQ:GOOG) spreadsheet for anyone who wants to take my valuation and make it their own (by changing the assumptions). I do this for two reasons. First, I believe that you learn valuation by valuing real companies in real time, not by talking about valuation or reading about it. Second, from a purely selfish standpoint, I pick the companies that I find interesting as potential investments or as real world case studies for my valuations of the week. I find the “crowd valuation” that emerges from this process to be useful in reassessing my own valuations.

As my first valuation of the week, I picked Tesla Motors Inc (NASDAQ:TSLA), for three reasons. First, as a technology company in an otherwise capital-intensive, mature business (the automobile manufacturing business), it stands out. Second, the company has a charismatic CEO, Elon Musk, an ambitious man (and I don’t mean that in a negative sense) with a great deal of imagination. Third,  the stock has taken off in the last year, up more than 500%, fueled by both positive news on the product front as well as on the financial front (increasing revenues, declining losses, paying down of debt). 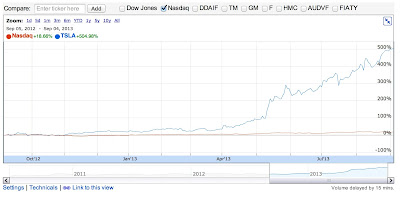 At its current stock price of $168.76/share, the market capitalization for the company is more than $20 billion. The question for investors, both in and out of the stock, is not whether the company was a good investment over the last year (of course, it was) but whether it is a good investment today. You can download the most recent annual and quarterly reports for the company.Using the standard metrics, the company seems  over valued. With revenues of $1.33 billion and an operating loss of -$217 million over the last twelve months, it seems absurd to attach a value of more than $20 billion to the company. At close to 15.4 times revenues, Tesla Motors Inc (NASDAQ:TSLA) is being valued more like a young technology company than an automobile company. However, these standard metrics are also often misleading with young companies, since value should be driven not by revenues and earnings today but by expectations for these values in the future.

For Tesla to be able to deliver value as a company, it is clear that it has to scale up revenues. On the good news front, the company has had a good year, with the revenues in the first six months of 2013 of $956 million representing a surge from revenues of $41 million in the first six months of 2012. While growth will get more difficult as the company continues to become larger, the question of how difficult cannot be answered until we define the potential market for the company. If we define it narrowly as electric/hybrid cars, the market is small (even though it is growing) and the potential revenues will have to reflect that. If we define it more broadly as the automobile market, the market is a huge one and Tesla Motors Inc (NASDAQ:TSLA)’s potential revenue expands accordingly.

Since the line between electric, hybrid and conventional automobiles is a fuzzy one, which will get fuzzier over time, I will take the view (optimistic, perhaps) that Tesla is an automobile company that happens to specialize in electric cars and measure its potential revenues by looking at the biggest automobile companies today. 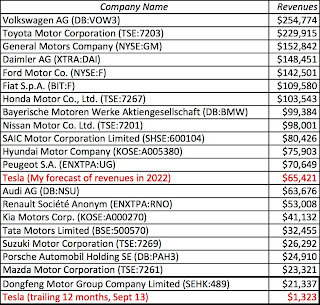 Based on revenues, the biggest companies are those that offer the full range (from luxury to mass market) of automobiles. It is true that BMW and Daimler make the top ten list, but they sell far more than just luxury cars. In valuing Tesla Motors Inc (NASDAQ:TSLA), I am going to assume (and I am sure that some of you will disagree) that success will bring them revenues close to those delivered by a company like Audi ($64 billion). While it is conceivable that Tesla’s revenues could approach those of the auto giants ($100 billion plus), I think the revenue growth required to get to those levels would be incompatible with the high operating margins that I will be assuming for Tesla. Assuming that Tesla stays making just electric cars, this forecast is an optimistic one, insofar as it assumes a rapid expansion in the electric car portion of the automobile market.

The second piece of the puzzle in Tesla becoming a valuable company is that it has to become profitable. Based on the reported loss of $216.72 million over the last twelve months, the pre-tax operating margin for the company is -16.31%. It is true that this paints too dire a picture of the company because the company did spend $306 million in R&D over the same twelve month period. Assuming a three-year lag, on average, between R&D expenditures and commercial payoff, and capitalizing R&D does reduce the operating loss to about -$21.86 million (resulting in an after-tax operating margin of -1.64%).

To get a sense of what the Tesla Motors Inc (NASDAQ:TSLA)’s operating margin will be, assuming it makes it as a successful company, I estimated the pre-tax operating margins of all publicly traded automobile companies globally, dividing the operating income from the most recent 12 months by the revenues over that period for each company. Since automobile companies have volatile earnings, I also computed a normalized pre-ta operating margin for each company by looking at the aggregate operating income over the last decade, as a percentage of aggregate revenues over that period. The distribution of the both measures of operating margin (the 2013 value and the average from 2003-2012) is shown below: 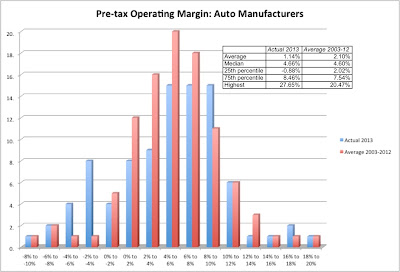 Note that the sector has low pre-tax operating margins, with the median value of less than 5%. Companies at the 75% percentile generate margins of between 7.5% and 8.5% and there are a few companies that generate double digit margins.  One of the outliers is Porsche which reported a pre-tax operating margin of close to 16% in 2013, though its ten-year aggregate margin is closer to 10%. You can download the dataset that includes the key numbers for all auto companies by clicking here.

For Tesla, we will assume that its focus will continue to be on high-end automobiles and that is margins will converge towards the higher end of the spectrum. In fact, I am assuming that the technological and innovative component that sets Tesla Motors Inc (NASDAQ:TSLA) apart will allow it to deliver a pre-tax operating margin of 12.50% in steady state, putting it in the 95th percentile of auto companies (and closer to the margin for technology companies). I will assume that the margin improvements occur over time, with the biggest  improvements happening in the near years. The figure below captures the forecasted operating income and margin, by year, in my valuation of Tesla: 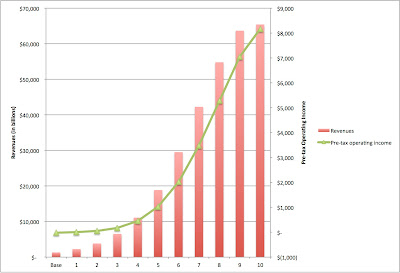