North American midstream growth is removing transportation bottlenecks for crude oil, and North American refineries have to face the music. The construction of pipelines and increase in rail capacity are starting to reduce some inventories. These factors coupled with weak European demand for Brent crude oil have caused the WTI-Brent spread to fall. Refineries have been able to make fat profits by refining cheap WTI crude oil and exporting it to the more expensive international markets, but now investors should be ready to discount some refiners. 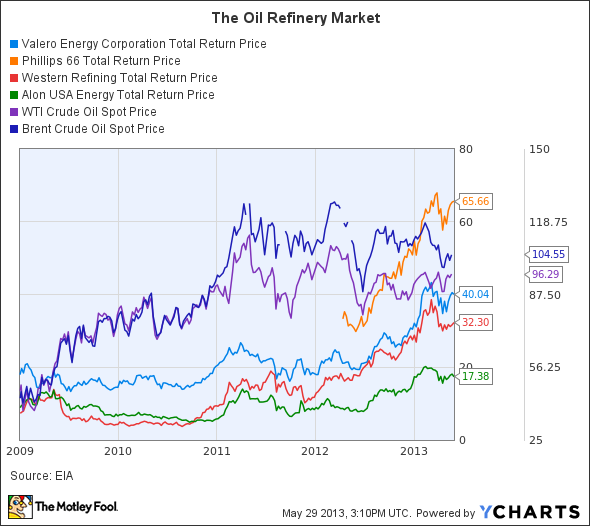 Valero Energy Corporation (NYSE:VLO) is one of the largest U.S. refiners and it is dealing with a number of positive and negative catalysts. On the negative side, the decline of the WTI-Brent spread will impact its exportation of distilled products. On the positive side, by using a natural gas to liquids process it will be able to take advantage of high diesel prices and low natural gas prices.

Over the next couple years Valero Energy Corporation (NYSE:VLO) is bringing online a number of new hydrocrackers to help boost its bottom line. Its new hydrocracker St. Charles is estimated to come online at the end of the second quarter, 2013. It has a number of smaller expansion products that will come online between 2014 and 2015.

The firm is expected to earn $5.40 per share (EPS) in 2013. With the falling WTI-Brent spread, its estimated EPS has come down from earlier estimates of $5.59. Regardless, Valero Energy Corporation (NYSE:VLO) is trading at a cheap forward price to earnings (P/E) ratio around 7.5. At these numbers investors can pick up a 2% yield with a total debt to equity ratio of 0.37 and a reasonable margin of safety.

Phillips 66 (NYSE:PSX) has a number of refineries from Malaysia to Germany. Right now, its widely diversified operations are a disadvantage as dedicated U.S. refiners have easier access to discounted Bakken and Canadian crude. The company is trying to completely remove Brent crude from its refinery operations, but this will be a process that occurs over a number of years.

With a market cap of $2.7 billion Western Refining, Inc. (NYSE:WNR) is a fly on the wall compared to Valero Energy Corporation (NYSE:VLO) or Phillips 66 (NYSE:PSX). Western Refining owns two refineries, one near the New Mexico-Mexico border and another near El Paso, Texas. In the current environment of the declining WTI-Brent spread, Western Refining, Inc. (NYSE:WNR) has a distinct advantage as its small size means that it is heavily exposed to regional U.S. spreads instead of the WTI-Brent spread. The company’s location close to the Permian and San Juan basins gives it easy access to fresh oil supplies.

Here is What Hedge Funds Think About Western Refining, Inc. (WNR)Valero Energy Corporation (VLO): Time to Catch This Refiner Before It Reaches...