In an effort to make America less dependent on foreign oil, the government mandates the use of biofuels. When a gallon of renewable fuel is created it is assigned a Renewable Identification Number or RIN. In the past year the prices for RINs have spiked and helped put margin pressure on refiners, but this resulted from a number of onetime factors. Don’t expect RINs to fall back down to their earlier low prices, but over the next two to three years they do not pose a major risk to the refining industry.

What Drove The Latest RIN Spike?
Industry estimates state that ethanol RINs exploded from $0.03 to current levels around $0.74. The latest RIN spike was driven by a number of factors. 2012 was a poor year for farmers, temporarily suppressing the corn crop that ethanol refiners need.

The long term issue affecting the refining industry is the blend wall. The majority of vehicles can only handle 10% ethanol, and the EPA’s RIN requirements are about to pass this 10% level. Some say that vehicles produced after 2001 can handle 15% ethanol, but infighting between industries has left E15 in limbo. An AAA survey in late 2012 found that only 12 million of America’s 240 million light vehicles are officially rated for E15.

The reality is that the infrastructure to increase biofuel consumption does not exist, and efforts to resolve the situation require car manufacturers to change their practices. The EPA realizes this, and for a number of reasons it has already cut back its 2013 RIN requirements. The infrastructure constraints related to E15 are out of refiners’ control, so do not expect RIN use to substantially grow over the next couple years.

What Does This Mean For Refiners? 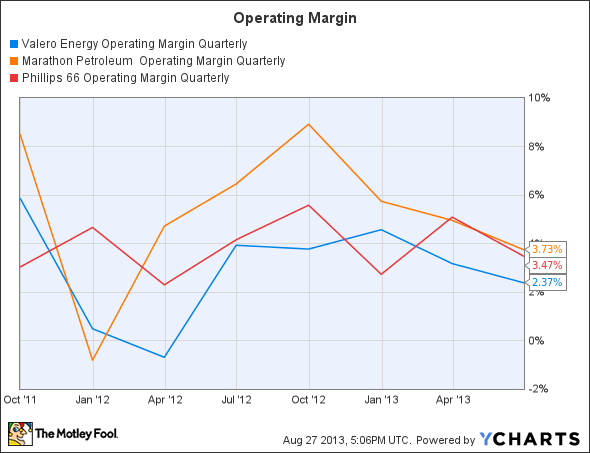 Valero Energy Corporation (NYSE:VLO) is one of the largest refiners in the U.S. Its second quarter RIN cost increased $78 million year over year. To help balance things out its ethanol operation’s operating income grew by $90 million in the same time frame. The refiner is one of the biggest ethanol refiners after it bought plants from the bankrupt VeraSun Energy Corp in 2009.

Valero Energy Corporation (NYSE:VLO) will enjoy a refining margin boost in 2014 as its takes possession of 5,320 rail cars between Q2, 2014 and Q2, 2015. These cars will help the company buy cheap crude that is landlocked in the middle of North America.