Just days after Valero Energy Corporation (NYSE:VLO) slumped following an announcement it will have to spend two to three times as much as it did last year to comply with federal ethanol blending requirements (due to the high price of credits it needs to buy under law), shares got gassed when the company reported a spin-off of its retail business. 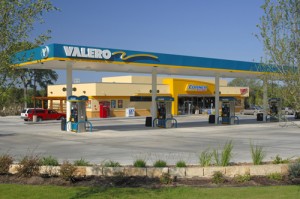 The San Antonio, TX international manufacturer and marketer of transportation fuels, petrochemical products and power, will distribute 80% of CST Brands Inc. For every nine shares of Valero stock as of April 19, shareholders will receive one share of CST Brands. The distribution is planned for May 1. CST Brands will trade on the NYSE under the ticker “CST.”

Valero Energy Corporation (NYSE:VLO) will retain 20% of CST after the share distribution. It will then sell the shares “as market conditions warrant”—likely within 18 months

CST, also based in San Antonio, is expected to be one the largest independent retailers of motor fuels and convenience merchandise in the U.S. and Canada. The company has some 1,900 sites and employees nearly 12,000 people. Retail locations are expected to hold onto the Valero Corner Store banner.

We believe the separated retail business will perform well and unlock value for our shareholders. In addition to its large and geographically diverse network of high-quality sites, the retail business has a long history of strong brand recognition and financial performance, as well as significant growth opportunities in merchandise, food service and new-build locations.

Merchandise sales at U.S. Valero retail stores climbed to $303 million in Q4 from $293 million in the same quarter a year earlier.

Last year was Valero’s second best in history. The strong retail showing makes a case for why investors might look to round-up, top-off or buy shares of CST Brands. Market participants should find a separated Valero attractive, too.  Several studies have found that spinoffs and their parents outperform the market, with spinoffs having an edge. Data from a 1993 article in The Journal of Financial Economics shows that spinoffs and parents outperformed the S&P 500 Index by an average of 30% and 18%, respectively, during the first three years of trading in spinoff shares.  Another study found that between 2000-2005, spinoffs surpassed market averages by 45% during their first two years. Parent companies, meanwhile, beat it by an average of 40%.

Valero Energy Corporation (NYSE:VLO) could be held back some due to the increased amount of money it must spend for ethanol credits. It will shell out between $500 million-$750 million this year, up from $250 million last year.

Refiners, including Phillips 66 (NYSE:PSX) and Tesoro Corporation (NYSE:TSO), have all cautioned the price spike in credits they must buy to comply with ethanol blending requirements will chip away at earnings. The cost of credits has soared from $0.03 per gallon in 2012 to more than $1 a gallon at one point this year.