In the midst of the airline industry’s recent stock-market bludgeoning, United Continental Holdings Inc (NYSE:UAL) CEO Jeff Smisek stepped in to make a significant investment in his company. While this clearly signals Smisek’s confidence in the company, United’s subpar earnings trajectory gives investors plenty of reasons to be skeptical about its future.

A bit of rough air

After performing extremely well in the first half of 2013, airline stocks hit heavy turbulence this month. The main culprit has been the Department of Justice’s decision to challenge the proposed merger between AMR Corporation (OTCBB:AAMRQ) and US Airways Group Inc (NYSE:LCC). This antitrust case spooked many investors, and led to a rapid correction in many airline stocks. The rising prospect of military action by the U.S. and other Western powers in Syria worsened matters by causing fuel prices to jump higher .

United, the world’s largest airline, has been hit particularly hard. Shares have tumbled more than 20% since hitting a 52-week high in late July. 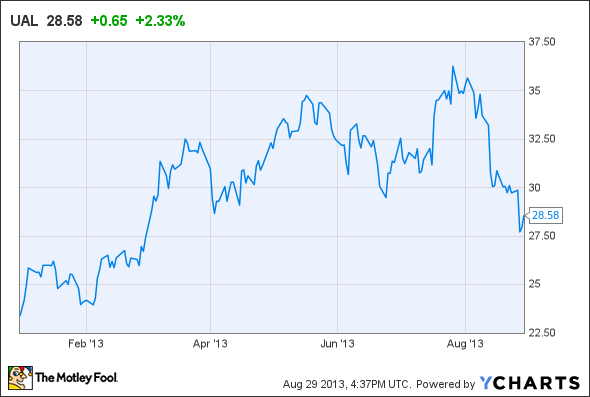 According to a recent regulatory filing, Smisek spent approximately $250,000 to purchase more than 9,000 United Continental Holdings Inc (NYSE:UAL) shares in the open market on Tuesday . This brings his total holdings of company stock to nearly 445,000 shares, worth more than $12 million at Thursday’s closing price of $28.50.

Smisek’s investment in United is definitely a good sign for investors. While there are many potential reasons for insiders to sell stock that they have acquired through stock options, they generally only buy more stock if they think shares are headed upwards .

As CEO, Smisek should have the best view of United’s prospects. If he thinks the stock is undervalued, other investors should definitely consider his perspective. That said, Smisek has held hundreds of thousands of shares through all of United’s ups and downs, so he hasn’t been the best predictor of the company’s fortunes over the past few years.

Analysts expect the company to break that ugly streak this quarter, but estimates have been on a downward march over the past 90 days. The average Q3 earnings estimate has dropped by 13% in that time period.