US Airways Group, Inc. (LCC): The Merger Solves Nothing

Consolidation in the airline industry is doing nothing to help companies succeed.

Note I said nothing about surviving. They’re doing that…but just barely. In fact, I don’t think even that is a guarantee for the plethora of airlines that we have in the American market space right now. I think the likeliest – and most useful – thing to occur would be for several of these firms to just – sad to say – go the heck away.

Which is why I think all the hoopla about the impending merger between US Airways Group, Inc. (NYSE:LCC) and American Airlines – owned by AMR Corporation – won’t do a bit of good. The two companies aren’t in the right industry in the right way to promote long-term success. Even with the growth that the merger brings, they’re betting the wrong way.

Investors should look at this chart of quarterly profit margins before committing any dollars to an airline: 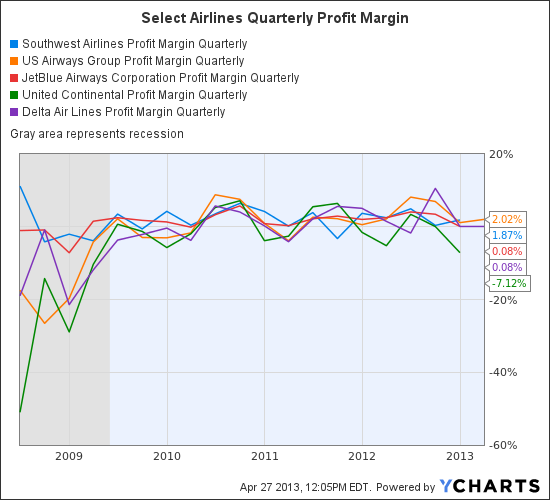 The aggregate profit margin for the most recent quarter for all five companies in the chart is (brings out calculator, mutters about nothing from nothing…carry the nothing…) -0.614%. That’s not designed to inspire confidence. Especially as the chart makes clear that this isn’t a one-time thing. Margins for each of these carriers isn’t what anyone would call high.

Fine, US Airways Group, Inc. (NYSE:LCC) leads the pack in the most recent quarter at 2.02%. That’s, um, good for them, I guess. But it’s not something that merging with a troubled firm like American is going to be helped by. Yes, the firm’s stock has trended up this last year by 77.62% and that’s good for people who’ve held it. But the valuation isn’t really supported by profits; it’s an artifact of all of the merger talk. Once that sort of thing gets out there in the chattering class it inflates share value like hot air inflates a balloon.

The simple fact is that the new combined firm, like United Continental Holdings Inc (NYSE:UAL), won’t be able to fix what’s broken in the industry. United Continental also took the ‘merge to grow’ approach and its shares have grown, sure, by 35.92% over the last year, but that’s an illusion if profits don’t follow. They haven’t, Q4 last year is the worst for any of the airlines in the chart outside of the recession of 2008-09. Not a pretty sight and not something you should invest in at this point.

Ditto another big firm – relatively – that the chart tracks. Delta Air Lines, Inc. (NYSE:DAL) is the largest air carrier by market cap that I put on that chart at $14.31 billion, and its EPS is good at $1.05, but it still has a net margin of 2.75%. No one should get excited about that except people who already have shares and can find someone to offload them on. Coming in at expectations with its most recent earnings report shouldn’t be an investment-magnet.