US Airways Group, Inc. (LCC), AMR Corporation (AAMRQ): If The Merger Goes Through

The U.S Justice Department and seven states and the District of Columbia recently filed suit to block the planned merger of US Airways, part of the US Airways Group, Inc. (NYSE:LCC), and American Airlines, a unit of AMR Corporation (OTCBB:AAMRQ). But if the companies win their trial this November, and the merger goes forward, investors will likely benefit.

If the merger goes through

The government based its decision on the premise that the new airline, which would keep the American brand name and become the largest in the world, would harm consumers by reducing flight options and increase fares. But a successful merger would offer shareholders and the public many advantages.

Overlapping functions within the two companies, such as human resources, accounting, and supplier management, could be combined, shrinking its costs and increasing its margins. AMR Corporation (OTCBB:AAMRQ)’s operating margin of 2.3% lags those of most of its airline rivals, including US Air and Delta Airlines. Until recently, the operating margin for United Continental surpassed that of AMR, too. 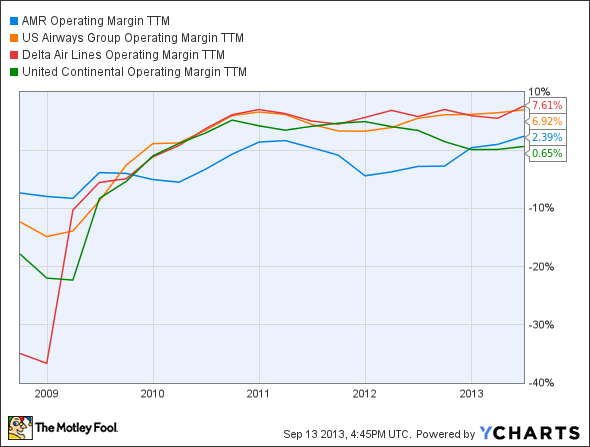 The new airline plans new routes to Europe and the U.S. West Coast, which should boost revenue. Recent top-line growth has been relatively lackluster at both AMR Corporation (OTCBB:AAMRQ) (2% growth over 5 years) and US Airways Group, Inc. (NYSE:LCC) (3%).

A larger airline would wield improved purchasing power. The new American could obtain the latest aircraft and technology, further reducing costs and boost profits over the long term. Newer planes coming into service are more fuel efficient, and since jet fuel is one of the airline industry’s highest-cost items, those newer jets might help improve the combined company’s bottom line.

What happens if the DOJ prevails?

Without the merger, the two companies will continue operating “as-is.” That wouldn’t be a good thing, especially for AMR Corporation (OTCBB:AAMRQ).

AMR’s bankruptcy has hurt its ability to attract new investors. Its plan to escape from bankruptcy will have to be modified if the merger does not happen. This will add complications to its operations going forward, and distract senior leadership from long-term thinking.

AMR Corporation (OTCBB:AAMRQ) has a lot of negatives besides with the bankruptcy process: periods of unprofitability, a lot of debt, no free cash flow, slim margins, and no dividend.

It will probably take several more years, if at all, before the company can right the ship on its own. AMR needs the merger to fix its current woes, if not to survive for the long term. With the stock looking so grim right now, investors may want to hold off on buying in if the merger fails.

In contrast, US Airways Group, Inc. (NYSE:LCC) is making money, at least. It reported earnings of $1.58 per share in July, but its growth has been uneven. For example, US Airways’ EPS is up overall for the last 12 months, but dropped 9% in the last quarter.

The company rang up a lot of long-term debt (more than four times equity) over the years purchasing new airplanes and buying jet fuel, two problem areas a bigger company could overcome much more easily. US Airways Group, Inc. (NYSE:LCC) also doesn’t pay a dividend, which is a turn-off to some investors.