Unum Group (UNM): Are Hedge Funds Right About This Stock?

Hedge Funds and other institutional investors have just completed filing their 13Fs with the Securities and Exchange Commission, revealing their equity portfolios as of the end of September. At Insider Monkey, we follow over 700 of the best-performing investors and by analyzing their 13F filings, we can determine the stocks that they are collectively bullish on. One of their picks is Unum Group (NYSE:UNM), so let’s take a closer look at the sentiment that surrounds it in the current quarter.

Is Unum Group (NYSE:UNM) a first-rate investment now? The smart money is getting more optimistic. The number of bullish hedge fund positions advanced by 1 lately. Our calculations also showed that UNM isn’t among the 30 most popular stocks among hedge funds. UNM was in 25 hedge funds’ portfolios at the end of the third quarter of 2018. There were 24 hedge funds in our database with UNM positions at the end of the previous quarter.

At Q3’s end, a total of 25 of the hedge funds tracked by Insider Monkey were bullish on this stock, a change of 4% from the previous quarter. The graph below displays the number of hedge funds with bullish position in UNM over the last 13 quarters. With hedgies’ capital changing hands, there exists a select group of key hedge fund managers who were adding to their holdings meaningfully (or already accumulated large positions). 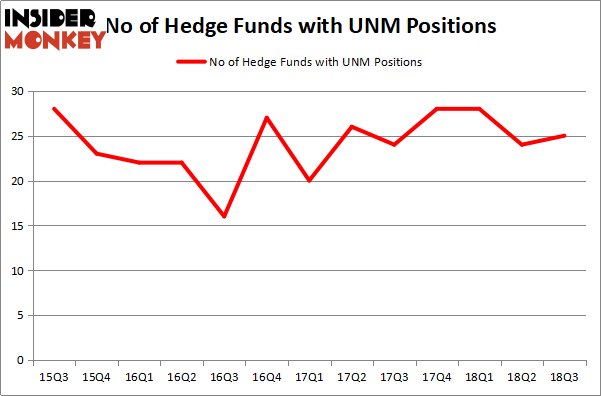 More specifically, AQR Capital Management was the largest shareholder of Unum Group (NYSE:UNM), with a stake worth $93.8 million reported as of the end of September. Trailing AQR Capital Management was Millennium Management, which amassed a stake valued at $53.5 million. Two Sigma Advisors, Arrowstreet Capital, and Renaissance Technologies were also very fond of the stock, giving the stock large weights in their portfolios.

As you can see these stocks had an average of 20.75 hedge funds with bullish positions and the average amount invested in these stocks was $494 million. That figure was $399 million in UNM’s case. FLIR Systems, Inc. (NASDAQ:FLIR) is the most popular stock in this table. On the other hand IPG Photonics Corporation (NASDAQ:IPGP) is the least popular one with only 16 bullish hedge fund positions. Unum Group (NYSE:UNM) is not the most popular stock in this group but hedge fund interest is still above average. This is a slightly positive signal but we’d rather spend our time researching stocks that hedge funds are piling on. In this regard FLIR might be a better candidate to consider a long position.