Recently, Elliott Management, under billionaire Paul Singer’s leadership, has been more active in Hess Corp. (NYSE: HES). Elliott said that it would nominate five executives to the board to push for restructuring. Elliott, which manages $21.5 billion in assets, has taken a 4% stake in Hess. The investment in Hess could be considered the largest initial investment in Elliott’s history. Elliott mentioned that if Hess did what Elliott said, Hess would be worth $126 per share, more than twice the current trading price of $62.50 per share. Should investors follow Elliott into Hess? Let’s find out.

Hess, incorporated in 1920, is a global energy company operating in many countries such as Algeria, Australia, Denmark, Egypt, France, and Ghana.  The company’s total proved reserves were estimated to be more than 1.57 billion BOE. The majority of revenue, $19.46 billion, or 50.6% of the total revenue, was generated from refined petroleum products. Crude oil and natural liquids were the second biggest revenue contributor, generating $9 billion in 2011 revenue. Hess has a high insider ownership level. John Hess, the Chairman and CEO, owns a 10.6% stake in the company. Nicholas Brady, the lead independent director, holds 5.57% of the total voting shares, while Thomas Kean, the independent director, is the owner of 7.43% stake.

At the end of January, Elliott revealed its intention to buy an additional $800 million worth of shares of Hess, as Elliott thought Hess might gain substantial value after restructuring. In a letter to Hess’s shareholders, Elliott highlighted that over the last 17 years, Hess has been underperforming its peers. Under John Hess leadership Hess gained nearly 235%, while its peers have gained more than 567%. In the last 5 years, Bakken operators have returned 236.8%, whereas Hess delivered a loss of 26.1%. It has also underperformed SPDR S&P Oil & Gas Exploration and Production by 39%. 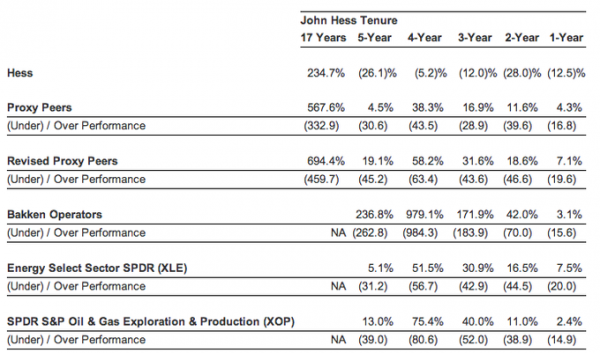 Elliott also said that the company’s board had the lowest independence rate. In addition, the independent directors of the company had no experience in the oil/gas industry. The majority of board members had personal and financial relationships with the Hess family. Thus, the independence in the board was questionable. However, Hess has very valuable oil/gas assets. Hess has around 900,000 net acres in the Bakken oil shale play in North Dakota. Hess’ Bakken asset has a higher per acre value than Continental Resources, Inc. (NYSE: CLR) and Oasis Petroleum Inc. (NYSE: OAS). Continental Resources is considered the biggest leaseholder in Bakken oil deposit with more than 1.1 million net acres, while Oasis has more than 300,000 acres. According to Von Gonten, a leader in petroleum engineering and geological service, the total value of Hess’s Bakken acreage was equivalent to the total value of Continental’s Bakken acres. In addition to the Bakken play, the value of Eagle Ford and Utica acreage are quite valuable. Furthermore, Hess holds significant interests in several “crown jewel” long life assets in the North Sea, Southeast Asia, Africa, and the Gulf of Mexico.