When a stock falls sharply in a short amount of time, it can sometimes spell opportunity. Universal Display Corporation (NASDAQ:OLED) dropped nearly 10% in a single day, on top of a 6.74% decline in the quarter. This happened because rumors circulated that Samsung would buy Novaled AG, a German company that is a supplier for screens used in televisions and handsets. The misunderstanding of Samsung’s intent sets up an entry point for bullish investors in Universal Display Corporation (NASDAQ:OLED). There are more reasons to like the OLED supplier as well.

An analyst at Oppenheimer & Co. explained why Novaled is different in the technology it offers to Samsung. Novaled makes “transport layers” in OLED displays. Conversely, Universal Display Corporation (NASDAQ:OLED) products are used in the “emitter layer” in an OLED device. Both are used in the creation of Samsung’s displays. 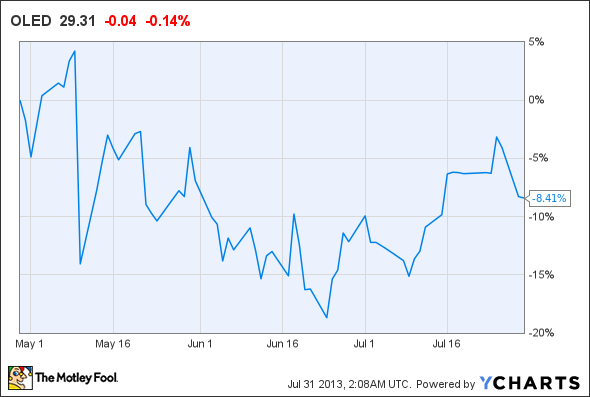 Ongoing innovation at Universal Display Corporation (NASDAQ:OLED) means the company is a compelling investment with long-term upside potential. The company is developing products outside of display as well, such as high-performance products for lighting. Its latest development is SOLED, an abbreviation for stacking diodes on top of OLEDs. Bezel-free lighting devices on plastic are possibly another future product.

OLED TVs offer the greatest potential for growth, however, since so much of the company’s product is needed in their manufacture. Working with LG Display, Universal Display Corporation (NASDAQ:OLED) is developing OLED displays that support both 2D and 3D modes. Giving OLED-based televisions incredibly thin physical characteristics could set them apart from the current mainstream LCD or LED televisions.

Universal Display Corporation (NASDAQ:OLED) has more than 3,000 patents which will support and foster growth for the entire OLED industry. The company is growing also constantly: it added 20% more employees last year to support university research projects as well as company projects.

Growth from the Samsung Galaxy S4

In the smartphone segment, the company will benefit from strong sales of the Galaxy S4. In 2010, the company earned $30 million in revenue from the first Galaxy phone. In 2011, sales grew to $61 million. By 2012, sales were $83 million; 50% of those sales came from material sales related to blue emitters and hosts. This material is used by customers like Samsung in OLED displays. Licensing contributed to 40% of the business.

Universal Display has around $220 million in cash. Its assets grew after the company bought OLED patent portfolios from Fujifilm in 2012. It is true that fundamental patents will start expiring in 2017, but the company has a sustainable licensing business. Deals with QUALCOMM, Inc. (NASDAQ:QCOM) and ARMHoldings suggest the patent business should do well in the next few years as Universal Display is substantially smaller than its patent licensees. Given its small size, the company appears more attractive as a takeover target.

Bearishness is extremely high on Universal Display compared to the others. The short float is 24.09% for Universal Display, compared to 1.10% for ARM Holdings plc (ADR) (NASDAQ:ARMH) and 0.92% for QUALCOMM, Inc. (NASDAQ:QCOM). The lack of bearishness for the chip makers is not surprising. Google’s Motorola division announced the release of the Moto X smartphone, which will be powered by a customized dual-core Qualcomm Snapdragon processor. The chip maker is also being selected to power Amazon’s next-generation Kindle Fire tablets.