Universal American Corporation (NYSE:UAM) is an insurance company headquartered in New York. Its core operations are in Medicare Advantage, but Universal American also has Medicaid operations, and is actively involved in developing ACO’s (Accountable Care Organizations). This stock is often forgotten since it doesn’t have a big market cap, especially when compared to other, much larger insurance companies. 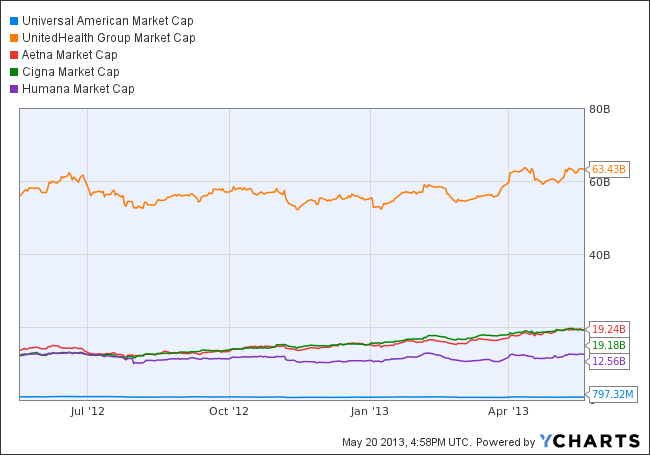 The chart above shows how Universal American Corporation (NYSE:UAM)’s market cap its dwarfed by its larger rivals. But sometimes, being forgotten can be a temporary blessing for investors. For quite some time, Universal American has remained undervalued.

For some perspective, the chart below shows the Price to Book ratio of other insurance companies, as compared to Universal American Corporation (NYSE:UAM): 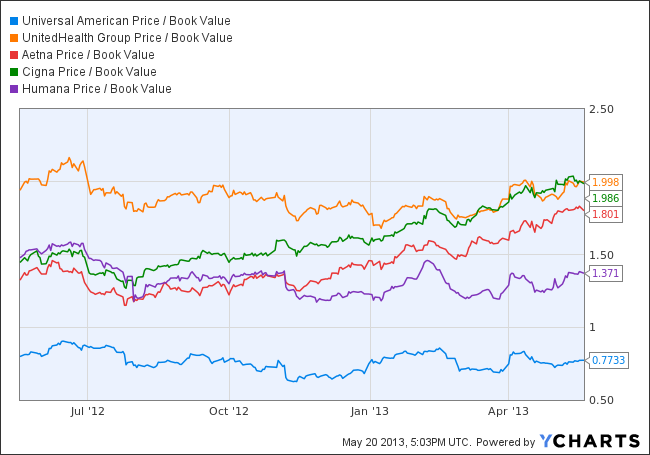 If you compare this chart to the first one showing market capitalization, you’ll notice that there is some correlation to market cap and Price to Book ratio. The larger companies such as UnitedHealth Group Inc. (NYSE:UNH) , Aetna Inc. (NYSE:AET) , and CIGNA Corporation (NYSE:CI) are given higher Price to Book ratios because they are more established companies and less prone to risk in any particular region or business segment.

UnitedHealth is the biggest company, offering a diversified list of healthcare in about every space you can imagine. So, they have the luxury of offsetting weakness in one segment with strength in another. They also aren’t in any big danger of losing a significant chunk of their business any time soon. UnitedHealth is well established and has plans all throughout the country. This stock won’t win many sprints, but its low beta of 0.58 and dividend of 1.40% should provide investors with some nice returns and low volatility over the long-term.

Aetna and Cigna aren’t quite as large with market caps just over $19 billion, but they still have solid diversification across multiple lines of business. In fact, both have gotten even stronger in the growing Medicare market through some acquisitions, where Aetna purchased Coventry Healthcare and Cigna purchased Healthspring.

Aetna is going to be a little more volatile than UnitedHealth with a beta of 0.99, but it still provides a nice dividend of 1.30%.  Cigna is a bit steadier of a stock with a beta of only 0.58, but provides no dividend. Neither stock provides a very compelling reason for investors to choose it over the likes of UnitedHealth, which has the benefits of stability, dividend, and a huge market share diversified across the country.

All that being said, while their competitors can command a higher Price-to-Book ratio with their stability and market share, there is no good reason for Universal American to continue trading below book value. The company had some compliance issues with CMS (Centers for Medicare and Medicaid Services) a few years ago, which shut-down its sales and marketing options for a while. But, those issues are completely behind the company now and it remains in solid financial position.