UnitedHealth Group Inc. (UNH): This Health Care Giant Is Propping Up the Dow

S&P currently gives the U.S. an “AA+” long-term sovereign credit rating. S&P downgraded the U.S. two years ago from a “AAA” rating, concerned about the inability of Congress to take any action on the country’s budget and debt issues. A “negative” outlook meant that the rating agency saw a 50% chance that it would lower its rating within the next two years. A “stable” classification means the ratings agency sees less than a 33% chance that it will lower its rating within the next two years.

While the credit-rating drop was a symbolic slap in the face to the U.S., S&P’s debt-rating change had no effect on the U.S.’ ability to borrow in 2011, and today’s outlook change will prove just as inconsequential. As such, the market is basically unchanged on the news.

Today’s Dow leader
Today’s Dow leader is UnitedHealth Group Inc. (NYSE:UNH), up 2% after Susquehanna Group raised its price target on the stock this morning from $72 per share to $79. As uncertainty rises over how long the Fed will continue its quantitative-easing program, investors have been flocking to investments that are not affected as much by the business cycle. Health insurers fit that bill, as their results are largely independent of the economy.

UnitedHealth Group Inc. (NYSE:UNH) has been giving investors other reasons to cheer besides its stability. Last week, the health insurer announced a 32% increase in its quarterly dividend from $0.2125 per share to $0.28 per share for a forward yield of 1.8%. This will be the fourth time in as many years that UnitedHealth has raised its dividend. 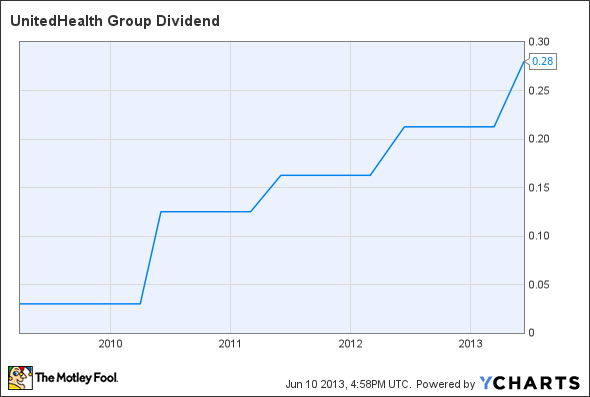 Dividend increases are a sign that management feels confident in a company’s long-term prospects. The company also announced that it was boosting its buyback authorization to 110 million shares, or just more than 10% of the company’s outstanding share count. These are particularly welcome signs, because they reflect management’s confidence in the future at a time when many investors are still worried about Obamacare’s effects on health insurers.

The article This Health Care Giant Is Propping Up the Dow originally appeared on Fool.com.

Dan Dzombak can be found on Twitter @DanDzombak or on his Facebook page, DanDzombak. He has no position in any stocks mentioned. The Motley Fool recommends UnitedHealth Group (NYSE:UNH).