Getting stuff from point A to point B has been going on for a long time; there’s nothing really new to the concept here. Global shipping goliath United Parcel Service, Inc. (NYSE:UPS) has been doing a bang-up job of it for years — since 1907, in fact, when the company was founded. Today, it’s the world’s largest package delivery company and in 2012 it was responsible for delivering 4.1 billion packages (16.3 million pieces per day) and brought in more than $54 billion in sales.

The chart below shows how United Parcel Service, Inc. (NYSE:UPS) has performed over the last five years: 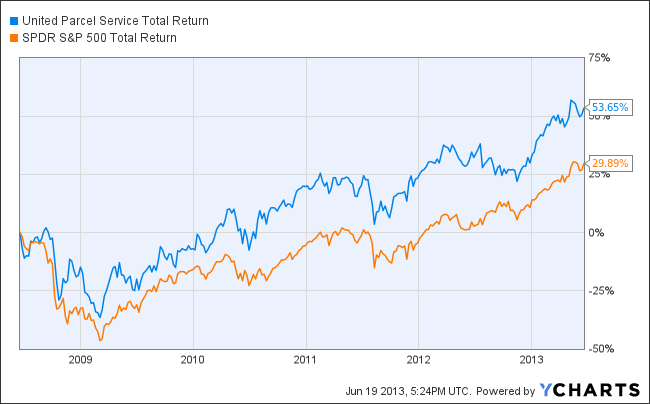 Moat-ilicious
We often hear the word “moat” thrown around when we’re looking at companies as potential investments. It was Warren Buffett who said: “In business, I look for economic castles protected by unbreachable ‘moats.'” Simply put, a moat is a company’s competitive advantage and the wider and deeper it is, the tougher it is for other competitors to infringe upon it.

As the world’s largest shipper, United Parcel Service, Inc. (NYSE:UPS) has a formidable moat in that it operates in a highly capital-intensive industry with tremendous economic and logistical barriers to entry. It would be extremely difficult for a start-up to come in and straight up disrupt this industry. So while global shipping may not be the sexiest business around, its moat certainly makes the stock look attractive.

E-commerce catalysts
I don’t know about you, but I order a lot of stuff online. And that trend is only growing in my household. Today in the U.S., e-commerce is booming, yet it’s still a tiny piece of the overall picture. It’s something we talk about all the time, but when we think about the winners from this trend, shippers can be the ones overlooked.

Big Brown keeps gettin’ it done
United Parcel Service, Inc. (NYSE:UPS) has had a decent run of it the past five years. But when I consider the company’s scale in its industry, its awesome moat and the unavoidable catalyst in e-commerce over the coming decade and beyond, Big Brown strikes me as a great holding for long-term-focused investors. With the stock trading at about 17 times forward estimates and offering up a close to 3% dividend yield, it looks like a great way to ship some profits to your portfolio for many years to come.

The article 2 Reasons You Should Buy This Stock Today originally appeared on Fool.com and is written by Jason Moser.