Is CBS Corporation (CBS) a Survivor?

Does this indicate a change in CBS’s overall fortunes? If you look at the last several quarters, the answer to that question would be no. Revenue has grown modestly but steadily on a quarterly basis; the company’s first-quarter revenue increased 6.40% year over year. In addition to increasing subscription revenue, CBS Corporation (NYSE:CBS) has enjoyed:

However, those aren’t the only positives for CBS.

CBS Corporation (NYSE:CBS) was in danger of losing NFL broadcasting rights this year, but it extended its contract through 2022. The importance of this deal shouldn’t be overlooked, since the NFL is consistently the most viewed program or event on television on an annual basis. CBS also recently acquired the remaining 50% stake for TV Guide Digital, which includes TVGuide.com.

What does Nielsen say?

The popularity of CBS television shows is important. The more viewers a show attracts, the more revenue CBS can accumulate through advertising. Let’s see how well CBS is doing in this area.

No. 2 The Big Bang Theory

No. 21 Person of Interest

No. 5 Person of Interest

CBS has a knack for finding creative talent. That being the case, CBS should continue to deliver top-tier programs that draw wide audiences.

Is CBS the best option?

Despite its successful deal-making and popularity, CBS might not be the best option in the space.

From a valuation standpoint, CBS is trading cheaper than News Corp (NASDAQ:NWS) and The Walt Disney Company (NYSE:DIS) 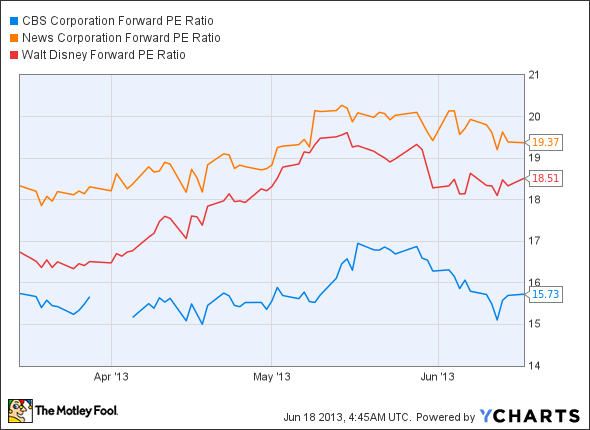 Cheap might be appealing, but CBS is also the most sensitive of these companies to slowdowns in advertising. During the financial crisis of 2008/2009, when ad sales shriveled, the stock fell like a rock in a bottomless pit. News Corp (NASDAQ:NWS) held up a little better, but The Walt Disney Company (NYSE:DIS) held up best.