Is United Microelectronics Corp (NYSE:UMC) an attractive investment now? Prominent investors are getting more bullish. The number of long hedge fund positions improved by 5 in recent months. Our calculations also showed that UMC isn’t among the 30 most popular stocks among hedge funds. UMC was in 17 hedge funds’ portfolios at the end of September. There were 12 hedge funds in our database with UMC holdings at the end of the previous quarter.

In the 21st century investor’s toolkit there are dozens of formulas market participants use to analyze stocks. A duo of the most underrated formulas are hedge fund and insider trading signals. Our experts have shown that, historically, those who follow the top picks of the elite investment managers can trounce the market by a very impressive margin (see the details here).

At the end of the third quarter, a total of 17 of the hedge funds tracked by Insider Monkey held long positions in this stock, a change of 42% from the second quarter of 2018. The graph below displays the number of hedge funds with bullish position in UMC over the last 13 quarters. So, let’s examine which hedge funds were among the top holders of the stock and which hedge funds were making big moves. 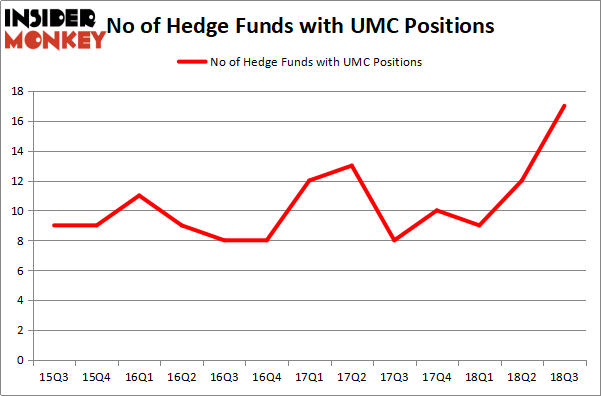 The largest stake in United Microelectronics Corp (NYSE:UMC) was held by Renaissance Technologies, which reported holding $44.6 million worth of stock at the end of September. It was followed by LMR Partners with a $14.6 million position. Other investors bullish on the company included Arrowstreet Capital, CQS Cayman LP, and OZ Management.

As you can see these stocks had an average of 24.5 hedge funds with bullish positions and the average amount invested in these stocks was $438 million. That figure was $92 million in UMC’s case. Etsy Inc (NASDAQ:ETSY) is the most popular stock in this table. On the other hand Dunkin Brands Group Inc (NASDAQ:DNKN) is the least popular one with only 12 bullish hedge fund positions. United Microelectronics Corp (NYSE:UMC) is not the least popular stock in this group but hedge fund interest is still below average. This is a slightly negative signal and we’d rather spend our time researching stocks that hedge funds are piling on. In this regard ETSY might be a better candidate to consider a long position.