I’m in the middle of rolling over a 401k from my former career, and I’m asking readers to follow along as I invest in some of the world’s best companies. Go here to see my portfolio in action, and click on my profile to the right to see other posts about this topic. Will you learn more from my successes, or my failures? Only time will answer that question, but I hope my investing journey helps you make great decisions and avoid my inevitable mistakes.

Cheap fuel built our world; it’s time to move on

Coal and oil have powered the world for centuries. These plentiful and cheap energy sources are a big reason mankind has flourished. The ability to generate electricity cheaply and travel across the globe quickly has benefited society in boundless, immeasurable ways.

Yet while there has been much that has improved the quality of our lives as a result of cheap energy, and there is much debate about both the levels and source of it, these cheap fossil fuels have played a role in climate change. Add in significant geopolitical implications behind the location of some of the largest oil reserves, and there are many reasons why a shift away from traditional sources and locations of fossil fuels is the right step. And this has created some great long-term investing opportunities as well.

The future of energy is diversity

Controversial in its own right, fracking has unlocked access to significant domestic sources of natural gas. And while there is debate about how much carbon is released into the atmosphere in the drilling process, there’s little argument that natural gas burns much cleaner than either coal or diesel, and it doesn’t require military intervention to get to it.

Ultra Petroleum Corp. (NYSE:UPL) has a misleading name; the company is the leader in low-cost natural gas production. And while the north American energy boom has been great for consumers of natural gas, E&P companies have been hammered as evidenced by Ultra’s most recent earnings report. The simple answer is historically cheap gas means historically low profits: 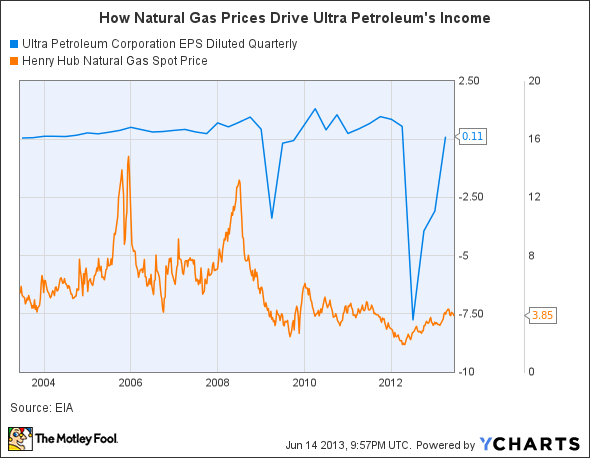 Ultra Petroleum Corp. (NYSE:UPL)’s earnings are directly tied to the price of natural gas, and those prices should continue to climb on the back of growing demand. As the concern over climate change has led to more use of NG over coal to generate power, its use as a transportation fuel could be a serious market mover over the next decade.

Clean Energy Fuels Corp (NASDAQ:CLNE) is at the heart of a serious push to move on-the-road shipping to natural gas. With a deep list of CNG customers in its core “return to base” market, Clean Energy is making a leveraged bet that shippers will adopt LNG en masse over the next couple of years due to cost advantages and reduced emissions. America’s Natural Gas Highway, its partnership with Pilot/Flying J, will reach over 300 locations in the next couple of years (with more than 75 ready to go today), giving Clean Energy a serious “first mover” advantage over traditional fuelers like Royal Dutch Shell plc (ADR) (NYSE:RDS.A), whose recent partnership with TravelCenters of America LLC (NYSEAMEX:TA) is targeted at only 100 locations in “the next couple of years.”