The soothsayer warned Caesar to “beware the Ides of March” in the Shakespearean play Julius Caesar. But there was no such warning for Ulta Salon, Cosmetics & Fragrance, Inc. (NASDAQ:ULTA) investors as the stock tumbled more than 16% on the day. The beauty retailer’s earnings outlook for the current quarter failed to match up to consensus estimates, leading to a massive sell-off.

The stock has endured a rough time over the past month, falling close to 25% ever since former CEO Chuck Rubin moved on to pursue another opportunity. The latest earnings call didn’t inspire much confidence either, as Ulta Salon, Cosmetics & Fragrance, Inc. (NASDAQ:ULTA) failed to top off a solid quarterly report with a decent outlook. These events have pushed the stock to within sniffing distance of its 52-week low, a far cry from the near 52-week high levels it was trading at before things started going haywire.

However, the stock’s fall from grace could well be an opportunity for investors to either enter the stock or add to their existing position, since the company is still growing at a decent pace. Ulta has exhibited terrific improvement in revenue, earnings, and margins over the past five years. It hasn’t been a dud as far as share price appreciation is concerned either.

Best of all, the stock is a lot cheaper than what it used to be, with a trailing P/E of around 28 times, which won’t seem too expensive once you look at the chart given below. 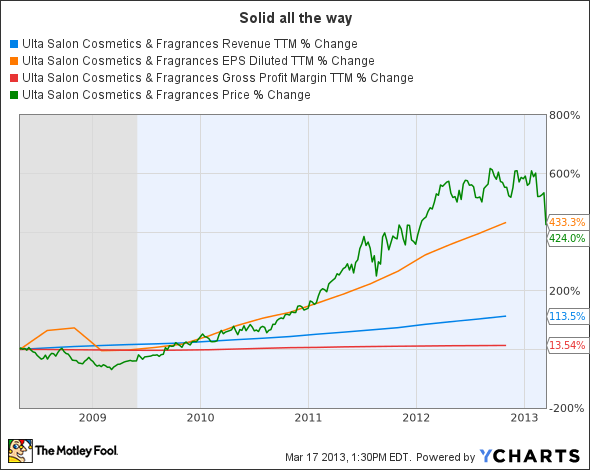 Ulta Salon, Cosmetics & Fragrance, Inc. (NASDAQ:ULTA) has been on a terrific run, which continued in its recently-reported quarter. For the full year, Ulta grew revenue 25%, accompanied by a 41% jump in earnings, and an 8.8% growth in same-store sales. The company is intent on keeping the momentum intact this fiscal year, built on the foundation of its 5-point multiyear growth strategy.

The drive to get better

Ulta currently has 550 stores in 45 states, and is looking to take that number up to 675 by the end of the year, representing an increase of almost 23%. One-third of the new openings will be in markets where Ulta Salon, Cosmetics & Fragrance, Inc. (NASDAQ:ULTA) doesn’t have a presence. More importantly, the company isn’t just increasing square footage and opening stores, it is also updating its stores to its new format.