When the Dow Jones Industrial Index was created it contained only 12 companies. One of these original companies was General Electric Company (NYSE:GE), and today GE is the only company to have been continuously included in the index over its entire history.

During that time GE has grown to be one of the largest and most profitable companies in the world. While GE’s financial arm nearly led to catastrophe during the financial crisis of 2008-2009, the company has scaled down this division to reduce risk. In 2006 half of GE’s profits came from the financial division while it’s now closer to a third.

GE has paid a dividend in every quarter for the last century, but the quarterly payout was cut severely in the wake of the financial crisis. After a $0.31 payment in Q1 2009 the dividend was cut to just $0.10 the following quarter. This coincided with a dramatic drop in the company’s share price. 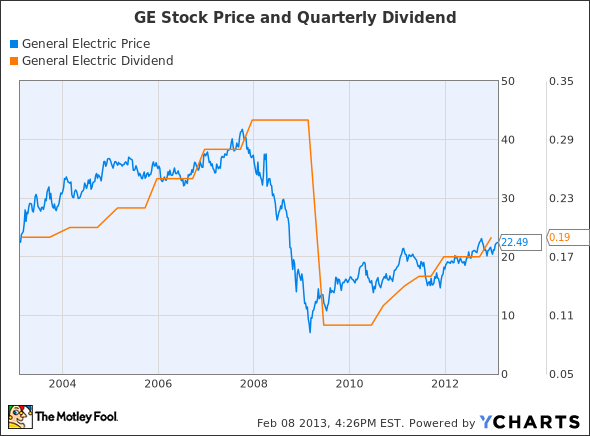 Since the dividend cut both the stock and dividend have increased substantially, although still not even close to pre-crisis levels. After raising the quarterly dividend at the end of 2012 by nearly 12%, putting the dividend yield at about 3.4%, is GE a solid dividend stock?

General Electric is somewhat of a difficult company to characterize, given its broad product offerings. One similar type of company is Siemens AG (NYSE:SI), the German conglomerate, which operates in many of the same industries as GE. Siemens currently pays a dividend yielding around 3.9%, paying an annual dividend instead of a quarterly one. I’ll also consider Honeywell International Inc. (NYSE:HON), which pays a 2.33% dividend yield, and 3M Co (NYSE:MMM), which pays a dividend yield of 2.3%. All of these companies operate in a broad range of industries and offer a large variety of products.

Note: I’ve converted Siemens dividend payments from EUR into USD using roughly the conversion rate at the time of payment.

Both Honeywell and 3M avoided cutting their dividends due to the financial crisis, although Honeywell failed to increase it on a couple of occasions over the past decade. Honeywell’s dividend has grown at an annualized rate of 8.22% over the past decade while 3M’s dividend saw slower growth of 6.67%. With yields around 2.3% for both companies this slow growth makes Honeywell and 3M look unattractive from a dividend perspective.

From 2003 to 2008 GE raised its dividend at an annualized rate of just about 10%. Since 2010 annualized growth was even higher at 23.36%. The big problem with GE is the drastic cut in 2009, leaving 2012’s dividend payment lower than that of 2003’s. Because most of GE’s problems were caused by the financial unit, this seems to me to be a one-time event. It was a huge failure of the company but hopefully they’ve learned from it.