Microsoft Corporation (NASDAQ:MSFT) isn’t a cool company. It went through a long stage of trying to fit in with the crowd, but that didn’t work out. Now Microsoft seems to be realizing that it should stick to what it knows best.

Microsoft Corporation (NASDAQ:MSFT) might be the brunt of many jokes, but you can’t argue with the company’s track record. Despite often being late to innovative trends in technology, Microsoft always finds ways to boost its revenue. Recently, the tech giant has made several deals that will increase its exposure to consumers.

For one thing, the company will create Windows Stores in 600 Best Buy Co., Inc. (NYSE:BBY) locations across the United States and Canada (500 in U.S.). Microsoft products being sold in these stores will include personal computers (PCs), tablets, Windows Phones, Xboxes, and accessories.

Windows Phones haven’t performed as well as Microsoft Corporation (NASDAQ:MSFT) would have hoped. Below is a quick list for mobile phone operating system market share in the first quarter:

Microsoft Corporation (NASDAQ:MSFT)’s partnership with Best Buy has the potential to slightly improve the company’s market share in the space, by giving it more exposure with shoppers. Is Windows OS going to catch Android OS or Apple iOS? No. But any increase in market share would lead to improved revenue and brand recognition.

The Best Buy Windows Stores will be more than 1,500 square feet, and as large as 2,200 square feet in some cases. It’s not likely that you will miss it when you walk into a  Best Buy.

If you’re wondering what’s in this deal for Best Buy Co., Inc. (NYSE:BBY), it improves product diversification and has the potential to increase foot traffic. For Best Buy, it’s not just about selling Microsoft products, but selling other products in the store to consumers once they arrive.

In another attempt at increasing exposure through a partnership, Microsoft Corporation (NASDAQ:MSFT) will also offer an Office app on Apple Inc. (NASDAQ:AAPL) iOS, which will be available on the iPhone, but not on the iPad. While basic documents will be available, there won’t be any chart or animation features, which will likely be a dealbreaker for many people. Also, in order to use this app, you will need Microsoft Office 365. If you don’t have it, a subscription it will set you back $100 per year. This move has potential as a solid revenue stream for Microsoft, but real traction is a longshot.

In other Microsoft Office 365 news, an online version that’s easy to use on touchscreen devices is now available. It’s being used by several retailers and charity groups, and it looks like strong momentum throughout the healthcare sector is likely. It will improve patient care and reduce operational costs for health organizations.

Microsoft isn’t nearly as popular as Google Inc (NASDAQ:GOOG) and Apple, but has it shown in the stock price? The chart below looks at the performance of Microsoft, Google, and Apple over the past 10 years: 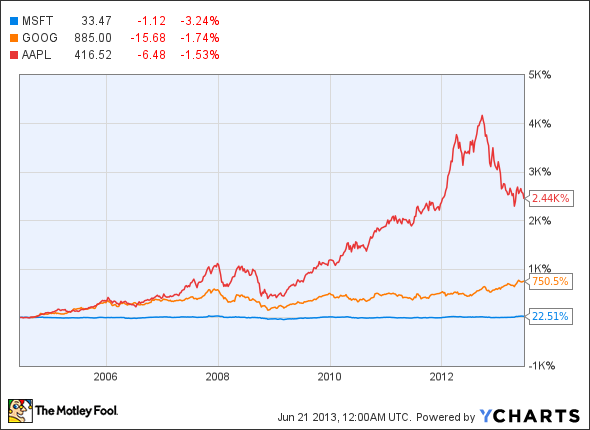 If you’re wondering why Microsoft Corporation (NASDAQ:MSFT) hasn’t been able to keep up with Google and Apple over this time frame, consider some of the products that these two companies have brought to the market. Google has delivered Chrome, Android, Google Maps, YouTube (acquired), and more. Apple has provided consumers with the iPod, iPad, iTunes, the iPhone, and more.