Tripadvisor Inc (NASDAQ:TRIP) spiked 20% last week; the company beat EPS consensus estimates and net income was up 26% year-over-year. Its 2Q EPS of $0.46 was inline with consensus. Part of the big earnings bump was the fact that the company began its first TV ad campaign last quarter. It also snatched up five companies.

What’s more is that interest for Tripadvisor Inc (NASDAQ:TRIP) is at all-time highs, according to Google Inc (NASDAQ:GOOG) Trends.

All the travel sties should see an interim boost thanks to the rebounding economy and rising employment. As people have more money, there should be a greater willingness to spend on traveling.

Unlike Tripadvisor Inc (NASDAQ:TRIP), Expedia Inc (NASDAQ:EXPE) took a large tumble last week. The company tanked over 25% on the news that 2Q EPS came in at $0.64 compared to $0.89 from the same period last year. This was well below consensus of $0.79.

Priceline.com Inc (NASDAQ:PCLN) is the travel industry’s leader by revenue, having generated some $5.5 billion over the past 12 months compared to Expedia Inc (NASDAQ:EXPE)’s $4.2 billion. 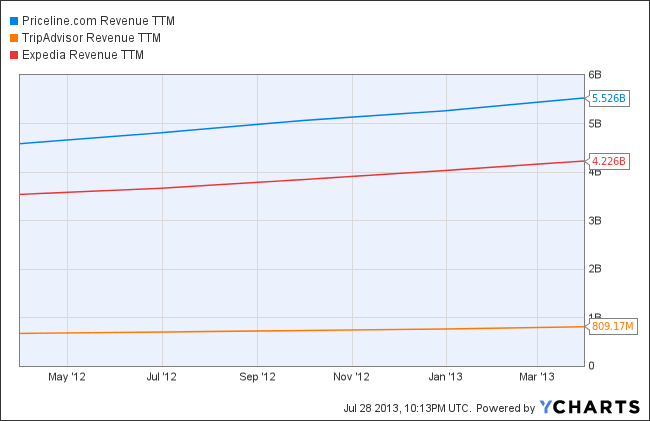 Back in May, Priceline.com Inc (NASDAQ:PCLN) snatched up Kayak Software Corp (NASDAQ:KYAK), further securing its position as the top online-travel servicer. Priceline has had great success in Europe. Over 90% of 2012 operating income was derived from international operations. The company is now turning to Asia to fuel growth.

I think that Priceline also has room to grow. Despite being the industry leader, the company, according to alexa.com, has global traffic rank of 670th, while TripAdvisor is ranked 223rd and Expedia 482nd.