It’s been a wild week for solar stocks, driven by an earnings season that’s seen everything from blowouts to complete duds. The following chart shows how some of the major newsmakers shook out — in some cases, even those bouncing back later in the week ended down. 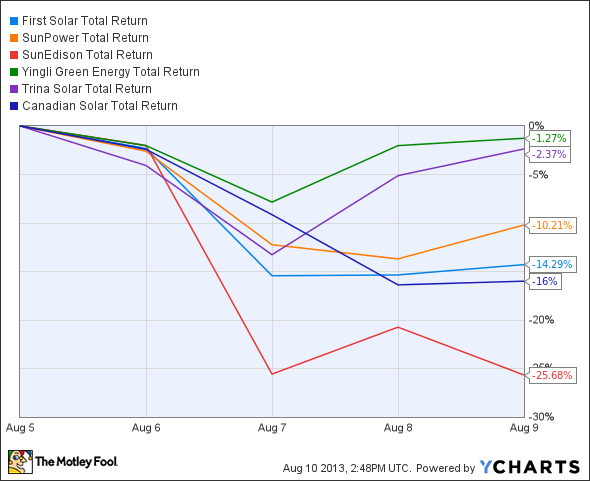 I’ll cover the major earnings news of the week and what investors should take away as earnings season moves forward.

Chinese earnings pick up steam
Chinese manufacturers began announcing preliminary results, and they’re beginning to improve. Trina Solar Limited (ADR) (NYSE:TSL) said shipments would be 630 MW to 660 MW, which was 130 MW above previous guidance. Gross margin of 11% to 12% was also well above the middle single guidance given last quarter.

Yingli Green Energy Hold. Co. Ltd. (ADR) (NYSE:YGE) saw similar improvement, with increasing gross margin in a range of 11% to 12%, and said shipments will grow 23% to 24% sequentially, from a previous guidance of percentage growth in the low to mid-teens.

Conditions are clearly improving in the Chinese manufacturer market as seen by improving margins across the board and higher shipments. What these companies aren’t reporting is a profit at this point. If Chinese demand picks up, margins improve in Europe, and Japan continues to have high sales prices, then we may see companies with low debt loads come close to a profit later this year.