The market has been volatile as the Federal Reserve continues its rate hikes to normalize the interest rates. Small cap stocks have been hit hard as a result, as the Russell 2000 ETF (IWM) has underperformed the larger S&P 500 ETF (SPY) by about 4 percentage points through November 16th. SEC filings and hedge fund investor letters indicate that the smart money seems to be paring back their overall long exposure since summer months, and the funds’ movements is one of the reasons why the major indexes have retraced. In this article, we analyze what the smart money thinks of Tricida, Inc. (NASDAQ:TCDA) and find out how it is affected by hedge funds’ moves.

Tricida, Inc. (NASDAQ:TCDA) shares haven’t seen a lot of action during the third quarter. Overall, hedge fund sentiment was unchanged. The stock was in 15 hedge funds’ portfolios at the end of September. At the end of this article we will also compare TCDA to other stocks including Air Transport Services Group Inc. (NASDAQ:ATSG), Beneficial Mutual Bancorp Inc (NASDAQ:BNCL), and Casa Systems, Inc. (NASDAQ:CASA) to get a better sense of its popularity. 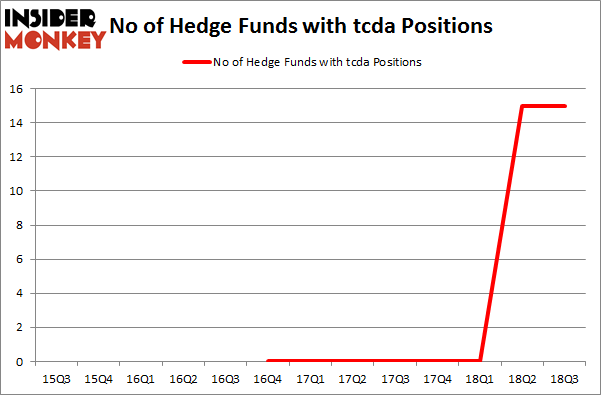 More specifically, OrbiMed Advisors was the largest shareholder of Tricida, Inc. (NASDAQ:TCDA), with a stake worth $332.7 million reported as of the end of September. Trailing OrbiMed Advisors was venBio Select Advisor, which amassed a stake valued at $54.1 million. Baker Bros. Advisors, Cormorant Asset Management, and Redmile Group were also very fond of the stock, giving the stock large weights in their portfolios.

Because Tricida, Inc. (NASDAQ:TCDA) has experienced bearish sentiment from the entirety of the hedge funds we track, it’s safe to say that there lies a certain “tier” of fund managers who were dropping their full holdings in the third quarter. It’s worth mentioning that Ken Griffin’s Citadel Investment Group cut the largest investment of the 700 funds tracked by Insider Monkey, worth about $1.2 million in stock, and Dmitry Balyasny’s Balyasny Asset Management was right behind this move, as the fund dumped about $0.5 million worth. These moves are important to note, as total hedge fund interest stayed the same (this is a bearish signal in our experience).

As you can see these stocks had an average of 12.25 hedge funds with bullish positions and the average amount invested in these stocks was $97 million. That figure was $511 million in TCDA’s case. Air Transport Services Group Inc. (NASDAQ:ATSG) is the most popular stock in this table. On the other hand Beneficial Bancorp, Inc. (NASDAQ:BNCL) is the least popular one with only 9 bullish hedge fund positions. Tricida, Inc. (NASDAQ:TCDA) is not the most popular stock in this group but hedge fund interest is still above average. This is a slightly positive signal but we’d rather spend our time researching stocks that hedge funds are piling on. In this regard ATSG might be a better candidate to consider a long position.