Three of the Dow Jones Industrial Average‘s (INDEXDJX:.DJI) most powerful companies experienced major turning points in their history on this day. Two are inextricably bound up in the same catastrophe, which had ramifications far beyond what anyone could have initially imagined. Let’s take a look at these days to better understand how they’ve shaped the world of business.

The crash that angered the world
The Exxon Valdez supertanker ran aground in Alaska’s Prince William Sound on March 24, 1989. The tanker struck Bligh Reef, which cut a hole in its side that spilled oil in enough quantities to create an oil slick 8 miles wide. The incident quickly captured the public’s imagination for its size — until 2010, it would be the largest spill in American waters — and for its well-documented damage to local wildlife. An investigation would soon reveal that Capt. Joseph Hazelwood had given control of the ship to lower-ranking and unrested crew members after having some drinks earlier in the evening, which turned him into a longstanding pop-culture joke and destroyed his career as a seaman, as you might expect.

More than half a million birds were killed by the oil spill, as were thousands of other marine animals and billions of fish eggs. Official estimates placed the volume of oil spilled at 11 million gallons, but alternative calculations have since revised this figure to as high as 32 million gallons. Exxon (now Exxon Mobil Corporation (NYSE:XOM)) received a public black eye for its lackluster early response to the spill and initially lost a lawsuit for $5 billion in punitive damages, although this was eventually reduced in the Supreme Court to just $500 million.

The threat of a multibillion-dollar penalty forced Exxon to seek out capital from what is now JPMorgan Chase & Co. (NYSE:JPM) , its preferred banker. The resulting financial innovation JPMorgan engaged in to remain on the right side of the original Basel I capital requirements led to the first “credit-default swap” in history. In an ironic twist of fate, the instrument created to reduce the financial risk of an ecological disaster would be one of the major risk factors behind a colossal financial disaster nearly two decades later.

Exxon ultimately paid little of the money originally demanded of it for the spill. In addition to the significant reduction in its legal damages, the company also managed to whittle a promise to pay $1 billion in cleanup costs down to just $25 million in 1991. Oil continued to foul the Prince William Sound coastline two decades later, as some 26,000 gallons could still be found in the area in 2007. It may take a century for the oil to dissipate, by which point it’s likely to have produced decades of elevated cancer incidence rates in animals throughout the food chain.

Is the creator of the credit-default swap a worthy investment, or are its recent missteps the warning signs of a financial giant that’s gotten too big for its britches? The answer to this question demands a bit of investigative work, so to help figure out whether JPMorgan is a buy today, I invite you to read our premium research report on the company. Click here now for instant access.

Now that’s a big rig
The first offshore oil rig built for any significant depth went into operation on March 24, 1955. Built for noted Texas oilman C.G. Glasscock and leased to , the “Mr. Gus” (Glasscock’s middle name was Gus) was a 4,000-ton, $3.5 million monster, built to handle more than double the depth of previous shallow-water rigs. It wasn’t a true deepwater rig as we now understand it, but it was undeniably a move toward tapping the deep sea. No rig had previously been capable of drilling in more than 100 feet of water, and Bethlehem Steel, the rig’s builder, predicted that this deeper seafloor region would require at least 100 more rigs like Mr. Gus.

Nearly 60 years later, the number of offshore oil rigs has grown far beyond Bethlehem’s estimation as ever-deeper oil is sought. In 2013, there were 840 offshore oil rigs available, of which more than 700 were leased for active production. The Gulf of Mexico, where Mr. Gus worked, uses roughly the number of rigs predicted — 76 oil rigs were under contract in the region, out of 110 available, in 2013. C.G. Glasscock and his pioneering company have since faded into the mists of oil-industry history, but many large offshore fleets can be added to your portfolio today. The largest rig fleet in the world belongs to Transocean LTD (NYSE:RIG) , the company with the self-explanatory stock ticker. 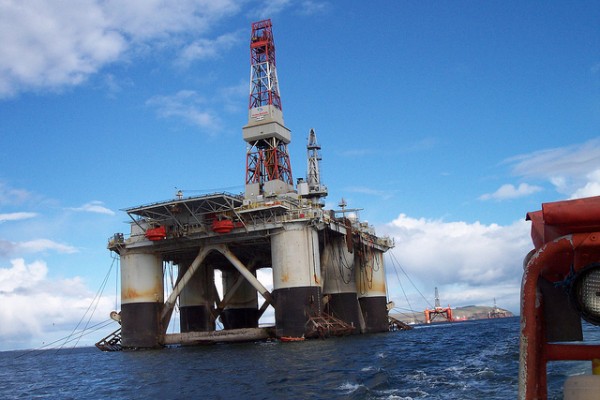 In 2013, it maintained 89 rigs, including some beyond what Glasscock and Bethlehem Steel would have thought possible in 1955.

A milestone in an industry that changed the world
The very first American-made automobile, a Winton motor carriage, found its buyer on March 24, 1898. Thus began the growth of one of America’s most important 20th-century industries. Few automobiles were sold in the 19th century — Winton managed to sell only about 100 in 1899 — but the potential was evident even then, and it was undoubtedly helped by Alexander Winton’s natural marketing savvy. He advertised in newspapers, staged races (memorably losing to a car built by Henry Ford in 1901), and supported the nation’s first cross-country drive, which took 64 days in a Winton touring car in 1903.

Winton lost his auto race to Ford Motor Company (NYSE:F) and wound up losing the business race to that legendary automaker as well. By the 1920s, the company was out of the auto business and instead focused on building diesel engines. It was bought out by General Motors Company (NYSE:GM) just before the Great Depression, missing out on the opportunity to experience the explosion of auto sales in the latter half of the 20th century. Some 57 million passenger automobiles were sold annually around the world a century after Winton’s first carriage found its buyer, and that number is expected to grow to more than 100 million per year by the end of the century’s second decade.

Fizzy origins
The first The Coca-Cola Company (NYSE:KO) was incorporated in Georgia on March 24, 1888. This is never part of the official Coke story, as today’s Coke traces its origins its incorporation by Asa G. Candler in 1892, but it is nonetheless an important part of Coke’s history.

Candler was part of the 1888 incorporation in addition to his role as founder of the 1892 company that forms Coke’s modern foundation — but so were Woolfolk Walker, Margaret Dozier (Walker’s sister), and Charley Pemberton, the son of The Coca-Cola Company (NYSE:KO) inventor John Pemberton. Within weeks of this first incorporation, the younger Pemberton sold his stake to a Candler-led group. This presaged a battle over the name “Coca-Cola,” the rights to which had passed to Charley Pemberton from his father.

During the summer of 1888, Charley Pemberton began to market a competing soft drink, which forced the Candler group to use alternative names — the rights to the legendary formula, however, remained with Candler. By August, a breakdown in the Candler group created another competitor, and three The Coca-Cola Company (NYSE:KO) fought one another for market share in the summer of 1888.