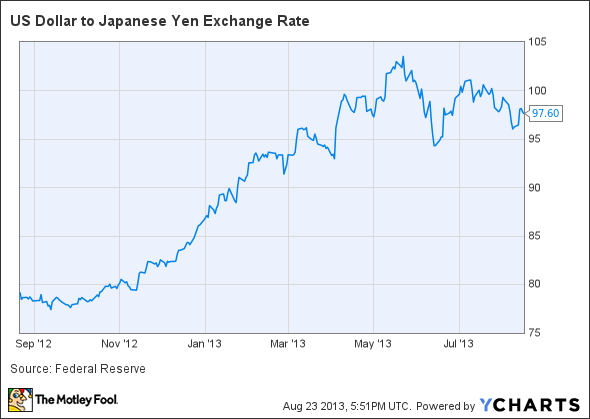 US Dollar to Japanese Yen Exchange Rate data by YCharts

Indeed, over the past year, the yen has lost more than 20% of its value with respect to the dollar. This change in the exchange rate benefits Japanese exporters. However, when you look at the yen-dollar exchange rate in context, it’s hard to argue that the yen’s recent drop is unfair in any way.

First, the yen-dollar exchange rate has remained well within the normal historical range this year. Second, one of the main factors that drove the yen to record highs against the dollar (before the recent correction) was the Federal Reserve’s quantitative easing programs. Indeed, loose U.S. monetary policy has been a major factor in improving the competitiveness of the U.S. auto industry. In this context, Ford Motor Company (NYSE:F) executives seem downright hypocritical.

This represents the second time this summer that a Ford Motor Company (NYSE:F) executive has criticized Japanese trade policy. Back in late June, Ford CEO Alan Mulally called Japan a “currency manipulator” and argued that Japan is a “closed market” where foreign automakers can’t compete.

The threat from a weaker yen to Ford Motor Company (NYSE:F) and General Motors Company (NYSE:GM) is very real. With lower costs, Japanese automakers can ramp up incentive spending to stimulate demand, meeting any excess demand with exports from Japan. Indeed, Nissan cut prices for many of its models earlier this year, and Toyota Motor Corporation (ADR) (NYSE:TM) recently cut the price of the Camry — the top seller in the critical midsize car market.

This is how free trade works
Currency movements are a natural part of a globalized economy with floating exchange rates. The Japanese economy has been significantly weaker than the U.S. economy over the past 20 years. Japan’s GDP peaked at more than 70% of U.S. GDP in 1995; today, Japan’s GDP is just 40% of U.S. GDP.

While many factors have played a role in Japan’s long economic slump, uncompetitive exchange rates have created a huge headwind for Japan. According to economic theory, a country with a relatively weak economy should see its currency fall compared with those of stronger economies. This mechanism acts as an “automatic stabilizer,” because as a country’s currency falls, it makes exports more competitive and imported goods less competitive.