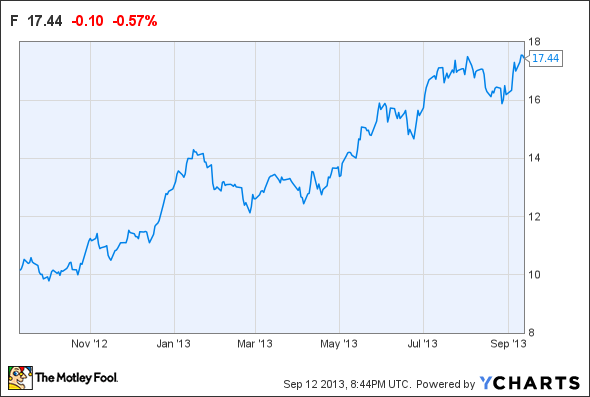 Ford and General Motors have both benefited in China from a territorial dispute between China and Japan. The dispute led to a nationalist backlash against Japanese automakers beginning last August and created a big opportunity for non-Japanese auto brands. As a result, Ford Motor Company (NYSE:F) saw strong sales gains in China during the past few months of 2012. Ford’s China sales are also up an impressive 50% year to date.

However, as Ford Motor Company (NYSE:F) begins to overlap the late 2012 period when anti-Japanese protests peaked, the company will face increasingly tough sales comparisons. On the other hand, Ford is introducing a variety of new models in China to bolster sales. The next few months will therefore be critical for Ford in China. The company will need to get strong performances from its new models to maintain a solid growth rate in the face of tougher comparisons.

Ford Motor Company (NYSE:F) jumped on this opportunity admirably. In July 2012, Ford Motor Company (NYSE:F) sold 42,560 vehicles, good for a 32% year-over-year increase. Sales ticked up slightly in August, but Ford then set monthly sales records in each of the last four months of the year, reaching a high of 70,510 vehicles sold in December. Year-over-year sales gains averaged around 50% over that time period.

Ford sales in China have exploded in the past year. Photo: The Motley Fool.

However, while Ford has continued to demonstrate strong year-over-year sales growth in 2013, it isn’t seeing the same level of sequential growth. In fact, the 2013 sales pace has averaged just under 69,000 vehiclesa month — less than Ford’s December 2012 sales total. At the same time, Japanese automakers have gradually made up ground. In fact, Toyota Motor Corporation (ADR) (NYSE:TM) now expects 2013 sales in China to be about 7% higher than its 2012 total.