The latest 13F reporting period has come and gone, and Insider Monkey is again at the forefront when it comes to making use of this gold mine of data. We have processed the filings of the more than 700 world-class investment firms that we track and now have access to the collective wisdom contained in these filings, which are based on their September 30 holdings, data that is available nowhere else. Should you consider TOTAL S.A. (NYSE:TOT) for your portfolio? We’ll look to this invaluable collective wisdom for the answer.

TOTAL S.A. (NYSE:TOT) shares haven’t seen a lot of action during the third quarter. Overall, hedge fund sentiment was unchanged. The stock was in 13 hedge funds’ portfolios at the end of September. The level and the change in hedge fund popularity aren’t the only variables you need to analyze to decipher hedge funds’ perspectives. A stock may witness a boost in popularity but it may still be less popular than similarly priced stocks. That’s why at the end of this article we will examine companies such as Netflix, Inc. (NASDAQ:NFLX), Comcast Corporation (NASDAQ:CMCSA), and PepsiCo, Inc. (NASDAQ:PEP) to gather more data points. 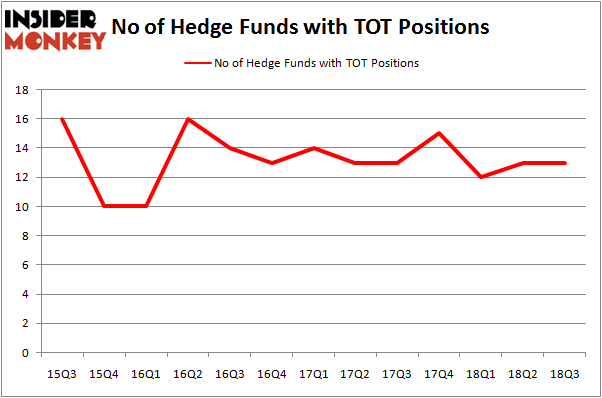 Among these funds, Fisher Asset Management held the most valuable stake in TOTAL S.A. (NYSE:TOT), which was worth $1048.6 million at the end of the third quarter. On the second spot was Arrowstreet Capital which amassed $16.3 million worth of shares. Moreover, Point72 Asset Management, Adage Capital Management, and Citadel Investment Group were also bullish on TOTAL S.A. (NYSE:TOT), allocating a large percentage of their portfolios to this stock.

Since TOTAL S.A. (NYSE:TOT) has experienced bearish sentiment from the entirety of the hedge funds we track, we can see that there exists a select few money managers that elected to cut their full holdings by the end of the third quarter. It’s worth mentioning that Michael Messner’s Seminole Capital (Investment Mgmt) sold off the biggest investment of all the hedgies tracked by Insider Monkey, comprising close to $13.7 million in call options. Bart Baum’s fund, Ionic Capital Management, also dropped its call options, about $3 million worth. These bearish behaviors are important to note, as total hedge fund interest stayed the same (this is a bearish signal in our experience).

As you can see these stocks had an average of 64 hedge funds with bullish positions and the average amount invested in these stocks was $5.41 billion. That figure was $1.10 billion in TOT’s case. Comcast Corporation (NASDAQ:CMCSA) is the most popular stock in this table. On the other hand BP plc (NYSE:BP) is the least popular one with only 32 bullish hedge fund positions. Compared to these stocks TOTAL S.A. (NYSE:TOT) is even less popular than BP. Considering that hedge funds aren’t fond of this stock in relation to other companies analyzed in this article, it may be a good idea to analyze it in detail and understand why the smart money isn’t behind this stock. This isn’t necessarily bad news. Although it is possible that hedge funds may think the stock is overpriced and view the stock as a short candidate, they may not be very familiar with the bullish thesis. In either case more research is warranted.