Hedge funds may not always be right, even collectively, but data shows that their consensus long positions have historically outperformed broader market benchmarks. For example, the Goldman Sachs’ VIP list, which includes the 50 stocks that appear the most often among hedge funds’ top-10 largest holdings, has beaten the S&P 500 gauge on a quarterly basis 64% of the time since 2001, including last year, when it delivered impressive 23% returns in a flat market. Meanwhile, Goldman Sachs’ list of the 20 ‘Most Concentrated’ stocks, which hedge funds own the highest percentage of in terms of the stock’s float, has gained 18% this year to the S&P 500’s 8% gains. Clearly, it’s worthwhile to pay attention to what hedge funds are buying, so let’s check out the latest 13F filing data to see what they think about Shire PLC (ADR) (NASDAQ:SHPG).

Shire PLC (ADR) (NASDAQ:SHPG) investors should be aware of a large decrease in activity from the world’s largest hedge funds in recent months. SHPG was in 50 hedge funds’ portfolios at the end of September. There were 64 hedge funds in our database with SHPG holdings at the end of the previous quarter. The level and the change in hedge fund popularity aren’t the only variables you need to analyze to decipher hedge funds’ perspectives. A stock may witness a boost in popularity but it may still be less popular than similarly priced stocks. That’s why at the end of this article we will examine companies such as Signature Bank (NASDAQ:SBNY), Allegion PLC (NYSE:ALLE), and Mallinckrodt PLC (NYSE:MNK) to gather more data points.

How have hedgies been trading Shire PLC (ADR) (NASDAQ:SHPG)?

At Q3’s end, a total of 50 of the hedge funds tracked by Insider Monkey were bullish on this stock, a 22% slide from the second quarter of 2016. That came after a large jump in the second quarter, putting hedge fund ownership back near where it was on March 31. With hedgies’ capital changing hands, there exists a select group of noteworthy hedge fund managers who were increasing their stakes meaningfully (or already accumulated large positions). 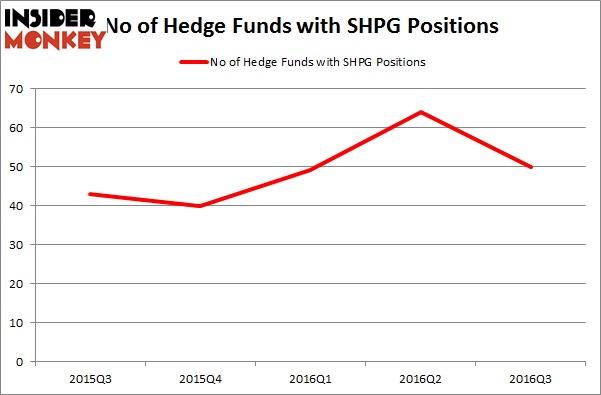