The healthcare reform law aims to expand insurance coverage to roughly 30 million uninsured Americans. The Affordable Care Act will provide millions of Americans with access to healthcare, creating new revenue streams for companies across the sector. The Act requires every American to acquire health insurance by 2014 or be subjected to a tax. Those who can’t afford health insurance will be offered subsidies or Medicaid. With more patients becoming eligible for Medicare and Medicaid coverage, hospitals are expected to see a reduction in bad debt expenses as more patients will be able to pay for their care.

Total healthcare spending is projected to grow from an estimated $2.8 trillion last year to $4.8 trillion by 2021, an increase of 70%. As a result, the stocks of private hospital operating companies are expected to outperform the S&P 500 index by a significant margin. I think this is the right time to pick up some fundamentally solid stocks in the sector.

I’ve screened three stocks based on one key metric, EBITDA Margin, which essentially measures the operating profit that a company is able wring out of each dollar of sales. The stocks I favor should have at least 12% EBITDA Margin consistently for the past four quarters, which ensures they are well positioned to benefit from the healthcare reform in 2014. I hope you will find the stocks listed below rather interesting.

My top pick based on EBITDA Margin is HCA Holdings Inc (NYSE:HCA), which is one of the largest private operators of health care facilities in the world. It is based in Nashville, Tennessee and currently manages 163 hospitals comprised of 157 general and acute care hospitals, 5 psychiatric hospitals, and 1 rehabilitation hospital. In addition, it operates 112 freestanding surgery centers. Its operations are structured into three geographically organized groups: National, Southwest, and Central.

Barclays Capital assigns it an “overweight” rating in an industry on which it has a neutral assessment overall. Jefferies Group raised their price target on shares of HCA Holdings from $30.00 to $45.00. They now have a “buy” rating on the stock. Deutsche Bank also raised their price target on HCA Holdings from $40.00 to $44.00 with a “buy” rating. 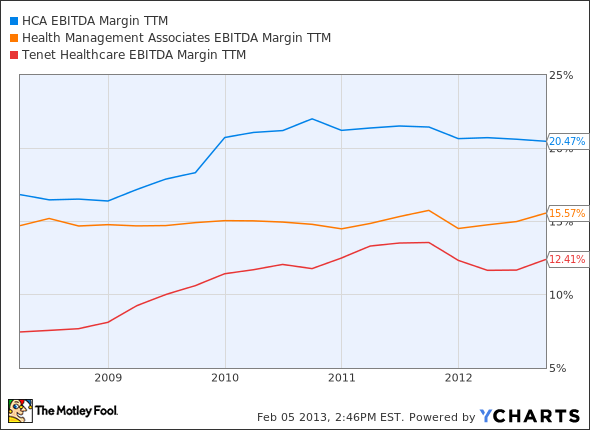 The no. 2 pick is Health Management Associates, Inc. (NYSE:HMA), which is a company that operates hospitals and health care facilities in the southern United States and is spreading across 15 states, with more than 10,000 physicians on staff. Health Management presently touches more than 3.5 million lives a year, and continues to grow.

Health Management reported 3rd quarter 2012 earnings of $0.18 per share. The company also had revenues of $1.7 billion. This beat the $1.6 billion consensus of the 14 analysts covering the company, and was 18.8% above the prior year’s 3rd quarter results.