Food delivery companies have seen a massive surge in business over the past year, largely driven by COVID-19 restrictions on restaurant dining. However, a deeper dive into the numbers indicates that food delivery has been on a consistently upward trajectory over the past five years and will continue to grow as people opt for convenience in everyday routines. According to data compiled by financial advisory firms Morgan Stanley and McKinsey, food delivery apps in the US posted $26 billion in revenue in 2020, compared to $22 billion in 2019.  The revenue numbers for 2018, 2017, and 2016 were roughly $18 billion, $13 billion, and $10 billion, clearly highlighting the upward trajectory of the revenue gain, and also underscoring how the companies would continue to grow after the pandemic boom. Some of the factors driving this growth are improving technologies, the rising number of people realizing the benefits of freelance work, and the consolidation of big businesses in the market that are trying hard to stamp out the competition with aggressive investment.

For example, Grubhub Inc. (NYSE: GRUB), one of the leading food delivery services in the United States, was acquired by Dutch company Just Eat Takeaway for $7.3 billion in 2020. Technology giant Uber (NYSE: UBER) also plans to expand UberEats, its food delivery service, amid rising competition from competitors. Tech firm Amazon is also backing food delivery app Deliveroo, which debuted on the stock market this year, as it prepares to make its entry into the business. Retail giants like Walmart have stepped up their delivery services as well.

These reasons underline why the food delivery companies are expected to continue enjoying the benefits of the pandemic boom well into 2021. The food delivery market is expected to grow to more than $200 billion by the middle of this decade. Since the entry of tech startups in the game in 2015, market revenue has increased by more than 200%. In countries other than the US, this business is growing too. For example, in China, food delivery applications can now reach more than 650 million people across the country.

This is why food delivery stocks are a hot item right now. Since the stock market plummeted as COVID-19 lockdowns were announced in March 2019, stock prices of food delivery firms have jumped more than 130%. This is why most analysts remain bullish on the food delivery industry.

However, as the economy reopens, it is important to exercise caution before investing in stocks. Even smart investors are finding it hard to stay ahead of the rising financial volatility. The entire hedge fund industry is feeling the reverberations of the changing financial landscape. Its reputation has been tarnished in the last decade, during which its hedged returns couldn’t keep up with the unhedged returns of the market indices. On the other hand, Insider Monkey’s research was able to identify in advance a select group of hedge fund holdings that outperformed the S&P 500 ETFs by more than 124 percentage points since March 2017. Between March 2017 and February 26th 2021 our monthly newsletter’s stock picks returned 197.2%, vs. 72.4% for the SPY. Our stock picks outperformed the market by more than 124 percentage points (see the details here). We were also able to identify in advance a select group of hedge fund holdings that significantly underperformed the market. We have been tracking and sharing the list of these stocks since February 2017 and they lost 13% through November 16th. That’s why we believe hedge fund sentiment is an extremely useful indicator that investors should pay attention to. You can subscribe to our free newsletter on our homepage to receive our stories in your inbox. 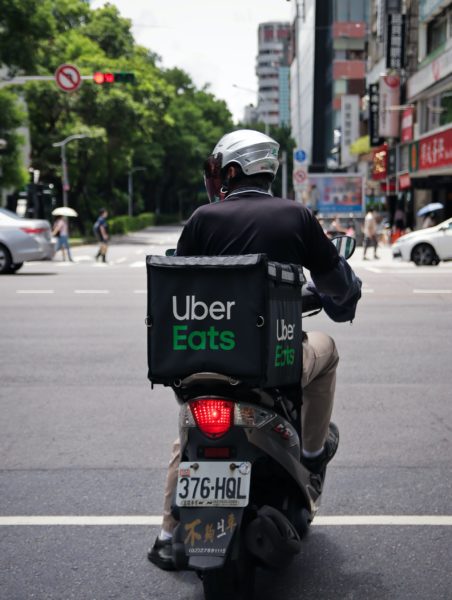 Photo by Zhuo Cheng you on Unsplash

Let’s look at the top food delivery stocks for 2021 starting from number 10.

Uber Technologies, Inc. (NYSE: UBER) is a San Francisco-based technology company with stakes in the ride-hailing, food delivery, and transportation businesses. Uber was founded in 2009 by Garrett Camp and Travis Kalanick. It is the largest ride-hailing service in the world and operates in the food delivery business through a subsidiary named UberEats. The food delivery service was started in California in 2014 and was expanded to other states in the US as well as several countries in Europe and Asia within the next few years.

The company presently controls more than 20% of the market share in the delivery industry with more than 66 million active users. UberEats is available in 6,000 cities worldwide in partnership with more than 600,000 restaurants. It surpassed $30 billion in gross bookings in 2020. Morningstar, a financial services firm, had earlier predicted that UberEats was critical to the success of Uber and that it would help the technology firm achieve profitability – something it has struggled with over the years – by the middle of this decade.

DoorDash, Inc. (NYSE: DASH) is a San Francisco-based food delivery platform. It was founded in 2012 by Tony Xu, Stanley Tang, Andy Fang, and Evan Moore. DoorDash is the largest food delivery service in the US and controls more than 50% of the market. The company has strong intent to dominate the market, evidenced by acquisitions of Caviar, a food delivery startup, for $410 million in 2019, as well Chowbotics, a robotics company famous for salad-making robots, for an undisclosed amount in February 2019.

The market cap of the firm is close to $43 billion and it posted almost $3 billion in earnings in December 2020. Last month, the company partnered with health firm Everlywell and Vault Health to deliver COVID-19 test kits to people in their homes in the US. The move was seen as part of a plan to improve the public image of the firm that has suffered under antitrust legislation. It debuted on the stock market late last year, raising more than $3 billion. The company was one of the main beneficiaries of the pandemic as sales more than tripled compared to 2019.

Company data reveals that it has more than 1 million people, also called “Dashers,” delivering food to users in the US. It has partnerships with more than 450,000 restaurants and serves over 20 million consumers. It also has a premium subscription program named DashPass that gives it an edge over rivals in the field. Evercore, a global investment advisory firm, earlier this week launched coverage on DoorDash with a price target of $153. Mark Mahaney, an analyst at the advisory firm, said DoorDash was viewed as a fundamentally strong asset with significant option value.

Papa John’s International, Inc. (NASDAQ: PZZA) is a Kentucky-based multinational pizza restaurant. It was founded in 1984 by John Schnatter. The restaurant is the one of the largest pizza chains in the world. It has more than 5,000 establishments operating in all 50 states of the US as well as more than 40 other countries. The pizza chain is primarily a takeout and delivery service but some establishments do have a dine-in option as well. In 2002, Papa John’s became the first pizza franchise to make online ordering available to customers.

The company has a market cap of almost $3 billion and posted more than $1.8 billion in sales in December 2020. In the last quarter of 2020, the global sales of the company grew 15.5% compared to 4.4% growth for the same quarter in 2019. The firm generated close to $470 million in revenue in the last three months of 2020, surpassing investor estimates. Rob Lynch, the president and CEO  of the company, acknowledged that the franchise was enjoying the third straight quarter of double digit comparable sales growth.

BMO Capital Markets, a financial services provider, late last month started coverage on Papa John’s with an Outperform rating with an assigned price target of $105. The firm said the rating and targets were consistent with the accelerating margin opportunities for the firm that would result in strengthened cash flow for shareholders. The shares of the franchise have been on the up since the beginning of the month. It is one of the best delivery stocks for investors to consider this year.

Grubhub Inc. (NYSE: GRUB) is an American food ordering and delivery platform that was founded in 2004 by Mike Evans and Matt Maloney. The company is headquartered in Chicago. In June 2020, Dutch food service firm Just Eat Takeaway acquired Grubhub for $7.3 billion to gain a foothold in the food delivery industry in the US. The company chief at the time said the aim was to be the biggest food delivery business outside of China. The company has more than 20 million users and serves in all 50 US states in partnership with well over 100,000 restaurants.

The company has a market cap of close to $6 billion and posted more than $1.82 billion in revenue in December 2020. The Dutch takeover of Grubhub came just months after American technology giant Uber made a move to purchase the firm. However, the negotiations for the sale stalled on price and regulatory concerns. Ultimately, Just Eat Takeaway acquired the company at $75.15 per share, slightly higher than the $59.05 price of the firm at the time. The Dutch company said Grubhub’s founder, Matt Maloney, would oversee Grubhub operations in the US.

CFRA Research, a market advisory firm, said earlier this year that Americans spent more than $1.5 trillion on food and beverages annually, with more than $600 billion of this going to restaurant and consumer food services, indicating a trend away from cooking at home across the country. It identified Grubhub as a reputable player in the game, with a 18% market share and regional divergences playing in favor of the firm, most especially in northeastern markets in the US like the New York or Boston areas.

Lyft, Inc. (NASDAQ: LYFT) is a San Francisco-based ridesharing and food delivery company. It was founded by Logan Green and John Zimmer in 2012. The services of the company can be accessed via a mobile app that lets users sign up using their email addresses or phone numbers. The company also offers car rentals. In late 2020, the company announced plans to move into the food delivery business via a conference call to investors as the pandemic hit revenue for the ridesharing and car rental business.

The company has a market cap of over $21 billion and posted over $2.3 billion in revenue in December 2020, well below the $3.62 billion figure for December 2019. The numbers posted by the company also highlighted a 48% decline in revenue in the last quarter of 2020 compared to the same time period in 2019. After the announcement of plans to move into food delivery, shares rose at least 6% the next day. The firm said it planned to base its food delivery on charging less than 30% commission on orders, something its restaurant partners asked for.

Morgan Stanley, an American financial services firm, last month revised targets for ride-sharing services like Lyft after the reopening of the economy signaled increased consumer spending on these firms. The target price of Lyft stock was raised 1.6% to $65 from $60. The firm said it was Equal Weight on Lyft. Brian Nowak, an analyst for the company, said that the revisions were based on data that highlighted that consumers were well-positioned to spend through the reopening as signs of life emerged post-pandemic.

Click to continue reading and see the Top 5 Food Delivery Stocks for 2021.

Disclosure: None. Top 10 Food Delivery Stocks For 2021 is originally published at Insider Monkey.

Is UPWK Stock A Buy or Sell? 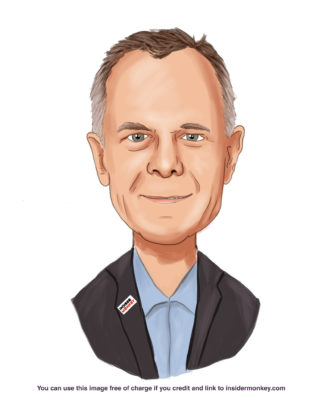 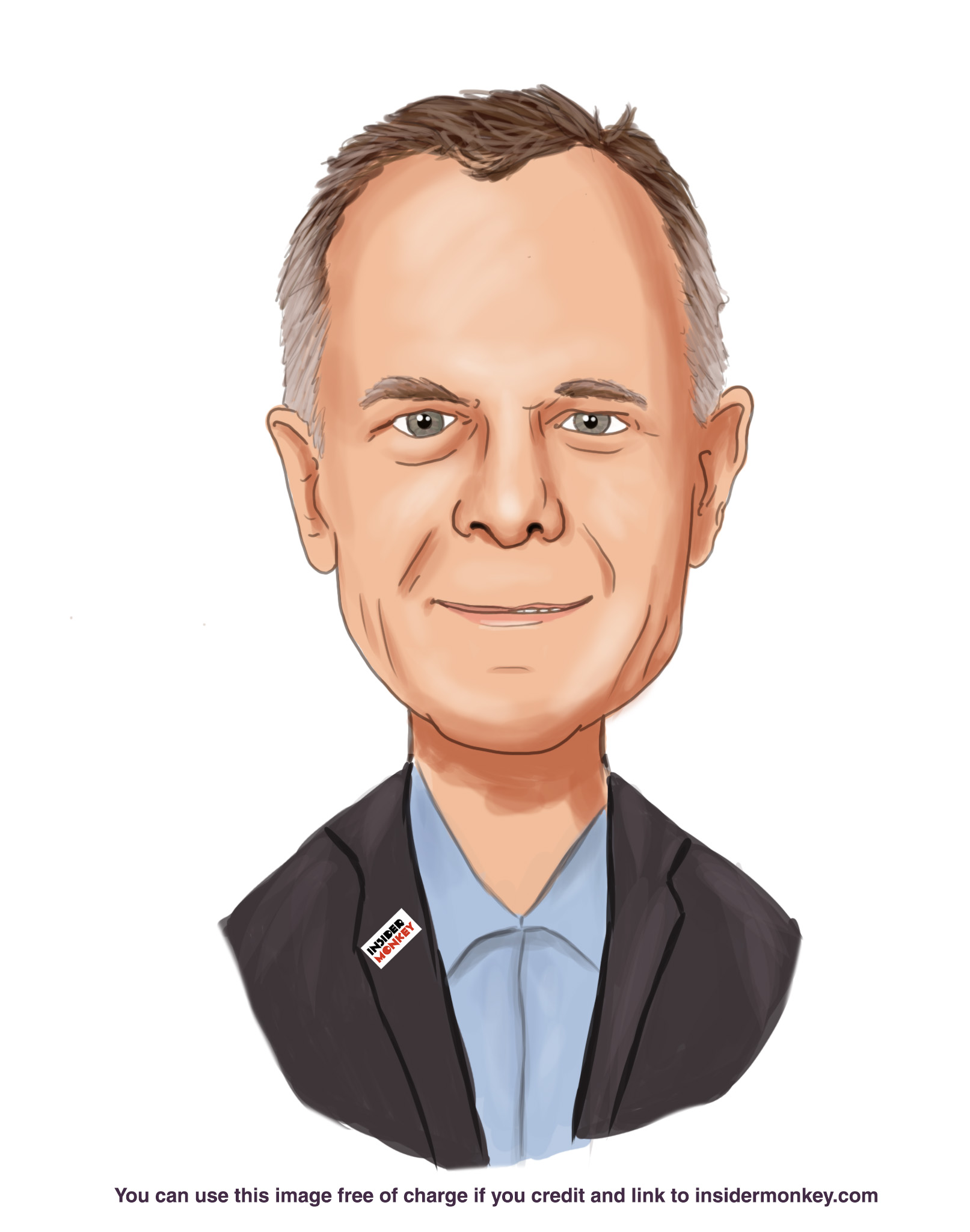 Is CB Stock A Buy or Sell?

Is BERY Stock A Buy or Sell?

Is TROW Stock A Buy or Sell?

Is XLRN Stock A Buy or Sell?