Netflix, Inc. (NASDAQ:NFLX) has built a streaming powerhouse licensing content from media owners and distributing it to customers. The company’s apps can be found on almost every new electronic device, giving it a leading position in the growing streaming market.

But as costs for that content rises Netflix, Inc. (NASDAQ:NFLX) is going to generate its own content to guarantee survival. The company has begun creating content such as House of Cards and Orange Is the New Black, but it needs to grow this segment to keep a loyal audience. To see the way all it needs to do is look at premium movie channels currently on cable as their guide, but not even that guarantees a profit for Netflix.

Showing the way
HBO showed the way for Netflix, highlighted by the wild success of The Sopranos and continuing today with Game of Thrones. The difference between HBO’s parent Time Warner Inc (NYSE:TWX) and Netflix, Inc. (NASDAQ:NFLX) is the amount of money it’s able to flow to the bottom line. 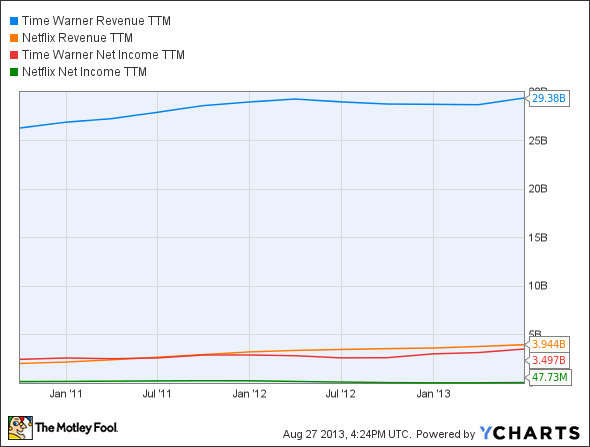 The key to profit in the media business
One of the challenges Netflix, Inc. (NASDAQ:NFLX) faces competing with media powerhouses such as Time Warner Inc (NYSE:TWX) and The Walt Disney Company (NYSE:DIS) is that it doesn’t have the same downstream revenue sources. The Sopranos commanded $2.5 million from A&E for reruns and is still playing on HBO, Sex and the City is playing on TBS and E!, and Time Warner has TNT, TBS, and other cable networks to push original content down to. These outlets generate both subscription and ad revenue without adding to the content costs, revenue sources Netflix doesn’t have.

The Walt Disney Company (NYSE:DIS)’s film studio and networks are even more expansive than Time Warner, but it’s actually theme parks that make The Walt Disney Company (NYSE:DIS)’s content so profitable. It spent billions of dollars buying Pixar and Lucasfilm because it can generate long-term revenue on its cable networks and at theme parks. The upfront cost of content is paid back over and over for years to come.

Foolish bottom line
So, can Netflix become HBO? Maybe it can generate great content, but from a profit standpoint I don’t think it can, because it doesn’t have the extra revenue sources that Time Warner Inc (NYSE:TWX), The Walt Disney Company (NYSE:DIS), or even NBC Universal have. These downstream revenue sources are the true profit generators, making it worthwhile to invest hundreds of millions of dollars in original content. Unless Netflix, Inc. (NASDAQ:NFLX) changes its model, it doesn’t have the same upside.

The article Can Netflix Be the Next HBO? originally appeared on Fool.com and is written by Travis Hoium.

Fool contributor Travis Hoium has no position in any stocks mentioned. The Motley Fool recommends and owns shares of Netflix and Walt Disney (NYSE:DIS).