Time To Get Aboard Tripadvisor Inc (TRIP)?

Tripadvisor Inc (NASDAQ:TRIP) was pushed down as much as 7% last week over concerns that growth in costs would outpace revenue growth for 2013The travel company released fourth quarter earnings results that beat expectations, but the company’s 2013 guidance included “costs that may well increase quicker than revenues in 2013.”

Concerns about full-year costs are overshadowing the better-than-anticipated fourth-quarter earnings, but is the worry overdone? And could investors use this as a chance to get into a niche travel industry stock?

TripAdvisor spun off from fellow online travel site Expedia Inc (NASDAQ:EXPE) in 2011. Expedia is still TripAdvisor’s largest customer, accounting for over 30% of revenues. This is an inherent risk and something of a disadvantage for the company. However, the spin-off has been a quid pro quo of pressures for both companies, where without TripAdvisor, Expedia’s revenue diversification is limited and the company’s spending on advertising is expected to rise.

The uniqueness behind TripAdvisor’s business model includes the fact that has a fundamentally different business model from the other travel websites that it gets grouped in with. The majority (+90%) of TripAdvisor’s revenues are generated from the sale of digital advertising. As far as the conventional travel websites, Priceline.com Inc (NASDAQ:PCLN) and Expedia are the undisputed industry leaders, as measured by revenues: 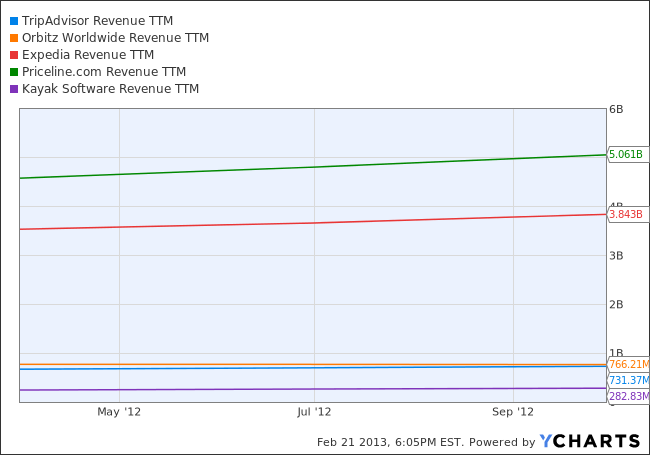 Priceline’s recently announced acquisition plans to snatch up Kayak will only further separate Priceline from runner-up Expedia. As far as recent performance, for the past twelve months TripAdvisor and Priceline have under-performed their major peers: 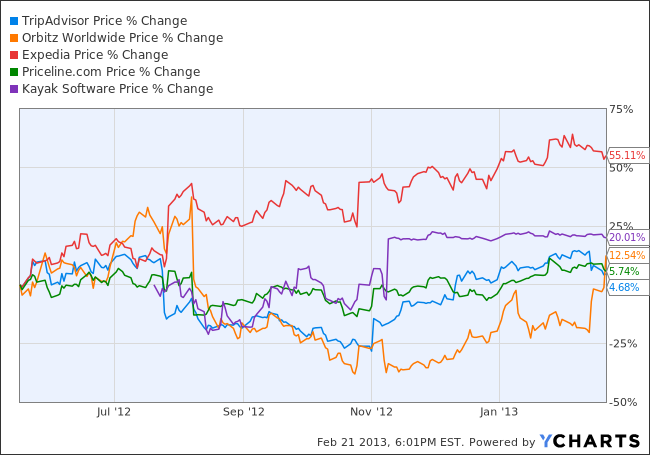 Of the two underperformers, Priceline might be the better bet for now. Priceline has solid international exposure, with 50% of revenues generated internationally, and the company is making strides to break into Asia with its Agoda and Ctrip acquisitions.

TripAdvisor’s plans for the  future include increasing its mobile and social presence (see if TripAdvisor is one of the top 4 internet companies). Part of this includes upping its expenditures on marketing, which is expected to move from around 35% of revenue in 2012 to 45% in 2013. Also boding well for TripAdvisor is its dozen acquisitions since 2006, which have been focused on mobile and social. But are these initiatives enough to outweigh the poor revenue diversification and dependence on advertising? Let’s see how TripAdvisor stacks up to its peers on a valuation basis–it does appear to be a bit expensive…